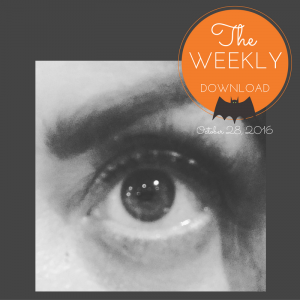 This has been a rough week for me, if you subscribe to my newsletter you’ll know why. If not, sign up now and don’t miss the next issue!

Since Halloween is on Monday and celebrations will begin this weekend, I decided to keep this edition of the Weekly Download lighter than usual and (for the most part) share things that made me laugh with an extended Friday Fun section. I hope they’ll have the same effect on you.

This isn’t a Halloween trick. Vine announced its demise on Thursday. If you or your company is a Vine creator and has an account with lots of loops, don’t worry… just yet. Vine says the process will take a while. They’re going to do it “properly”, keep the website live and not discontinue the app just yet. You can find out more and stay in the “loop” by following Vine’s blog and Twitter account. Is this the thin edge of the dismantling of Twitter?

Facebook Introduces Halloween-Themed Emojis and “Masks”
This morning when I checked my feed, the first thing I saw was the post below from one of the true Spin Sucks crazies, Laura Petrolino. 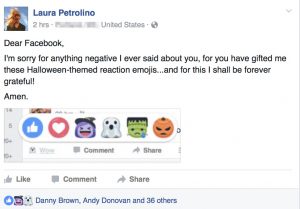 And her PIC, Corina Manea shared more big news about the platform – “masks” – launching on Monday! Happy Halloween!
A Stranger Things Christmas
H. B. Reese should probably be credited as the originator of mashups, his delicious Reese’s Peanut Butter Cups were created in 1928. So what mashup could be better than peanut butter and chocolate? What about Peanuts and Stranger Things?

The Dress is Back!
This week there were two sets of trending photos in what’s being dubbed as this year’s version of the #TheDress.
The first involves Bill Murray and…

Who doesn’t love him? I’ve been a fan since the original SNL days but it’s his dramatic role in Lost in Translation that’s my favourite. What about you? There was some confusion when a three-year-old photo taken at a golf competition in Scotland by Laura DiMichele-Ross of herself and her son and posted on Facebook. This week reddit (from a three-year old thread) and the Internet in general, went crazy debating whether or not the man in the photo was actually Bill Murray or his lookalike (what?!) Tom Hanks. What do you think?

The second is about something we can all relate to…
Legs! Now known as “The Legs” thanks to author/actor/YouTuber @Joe_Sugg aka ThatcherJoe.

This scoop is Instagrammer @leonardhoespams posted a photo of her legs. The photo tweeted by @Joe_Sugg went viral. It was picked up by the likes of HuffPo and Mashable. People debated endlessly about whether or not the reflection on @leonardhoespams’ legs was created by oil or paint, and if the latter how exactly was that done. Well for inquiring minds who want to know, I’ve done some sleuthing. You’re Welcome!

Carpool Karaoke with Lady Gaga
Do you ever get tired of James Corden’s Carpool Karaoke? I don’t. This week he was joined by Lady Gaga who also takes a turn in the driver’s seat. Watch out. I dare you not to sing along.

What made you laugh this week? Share it with us in the comments.

Barbies and Kens, Marvel and girls, Hillary – a clear choice from the archives for this pre-Halloween Friday. In this episode, Angela and I promise to spend less time talking about silicon equality and more talking about real human equality – namely about the personal attacks on Hillary Clinton and how that is affecting women at large. SXSW finally followed through on their panel discussions about Gamergate and online harassment but the results were a little disheartening. Two Toronto teens won Women of Distinction Awards for their efforts in battling sexual harassment and Marvel has launched a program for girl scientists we want to tell you all about.
Listen up! And, if you like what you hear, please review Ada’s Sisters on iTunes.