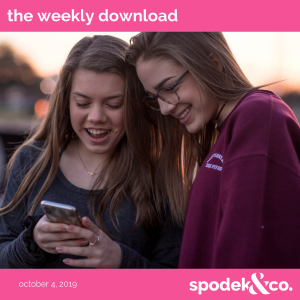 Welcome back to another edition of The Weekly Download! From no name’s Union Station takeover to Instagram’s new standalone messaging app and Prince Harry’s stand against bullying, we have a lot to cover today… So let’s get started!

It’s a “companion” app for Instagram that allows users to quickly share text, photos and videos with your close friends list. In fact, Threads is very similar to Snapchat, an app Instagram has often “borrowed” features from in the fight for social media dominance and teenage attention.

The app has some red flags due to its constant, passive sharing of location, status and other intimate data, which is probably why Instagram wrote a blog post about Threads privacy in coordination with the launch.

According to Instagram, the app’s Auto Status feature will always request permission to share what you’re up to and require your approval before doing so. Threads won’t share your precise location, but it will store some of your information on your device for a limited time.

Will you check out Threads? What are your thoughts and feelings about the app’s privacy implications? Let us know in the comments below.

New Evidence Proves Quitting Facebook is Good for Your Health

You may have toyed with the idea of quitting Facebook for awhile now, and now there’s evidence to further sway you in that direction.

A new report titled “The Economic Effects of Facebook” was published this week that confirmed quitting Facebook can be good for your health. As part of the study, Texas A&M students who went off Facebook for a week were compared to students who stayed active on the app.

The findings showed that those who were off Facebook consumed less news, ate out less, made fewer impulse purchases, were more productive, and reported greater overall well-being.

Are you surprised by the findings? Would you give up Facebook for the reported benefits to your health?

In recent months, Loblaw’s “no name” brand has gained an audience beyond Canadian borders thanks to its Twitter account and the hilariously deadpan, no-nonsense packaging we have all come to know and love.

smooth but not disrespectful pic.twitter.com/6uHV7TrNrh

It’s another way for the brand to talk to Canadians in a “no name” way, says David Wotherspoon, Loblaw Companies’ senior creative director.

Since launching the no name Twitter account, the brand has amassed over 36,000 followers — nearly double that of the Loblaw Ontario’s account and over four times that of No Frills.

POZitivity has three main goals: challenging the stigma surrounding people living with HIV,  access to services, testing, and prevention as well as educating people on PrEP, PEP and U=U.

In support of the cause, the “Slay Stigma” drag tour will travel across the country this month featuring several local drag performers, Canadian HIV and U=U activist Randy Davis from the Gilbert Centre and RuPaul’s Drag Race star Trinity K. Bone’t.

Want to learn more about the tour? Visit POZtivity’s website and take the pledge.

This week Prince Harry issued a statement that slammed the “ruthless campaign” of British tabloids against his wife, Meghan Markle.

Said Prince Harry, “My wife has become one of the latest victims of a British tabloid press that wages campaigns against individuals with no thought to the consequences — a ruthless campaign that has escalated over the past year, throughout her pregnancy and while raising our newborn son.”

Harry added that the matter was especially personal for him, given the untimely death of his mother, Princess Diana, who faced intense scrutiny at the hands of the press.

The couple is funding the lawsuit against the newspaper giant privately, and if any damages are awarded, the proceeds will be donated to an anti-bullying charity.

And now for some happier royal news…

Thanks Cape Town for another impactful and memorable day! A few more highlights of this very special visit with Archbishop Desmond Tutu #RoyalVisitSouthAfrica Video ©️SussexRoyal