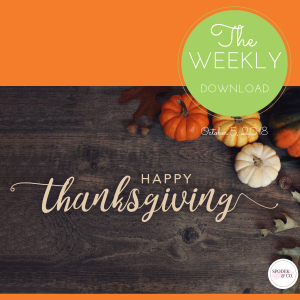 Happy Friday, everyone! After a productive week, the Spodek & Co. team is very much looking forward to the Canadian Thanksgiving long weekend. Let’s face it, for most of us it’s an excuse to stuff our faces with turkey, gravy and mashed potatoes! Yum!

In this week’s Weekly Download, we’re going to explore yet another Facebook hack— and this one’s a doozy—plus take a look at their new anti-harassment features. We’ll  also tell you who Instagram has picked as their new CEO, and check out Twitter’s in-stream ads and Pinterest’s new discovery feature. So, grab your coffee and settle in!

Last week, I felt a buzz on my phone. It was an alert from CNN and it wasn’t good news. “Facebook hack exposed 50 million users’ info –and accounts on other sites,” it read, and outlined the largest hack Facebook has experienced in its 14 years of operation. Good grief.

Here’s how it went down: The hackers exploited a bug in a feature called “View as”—which allows users to see their Facebook page from the view of an outside account. They were then able to use these accounts as if they were their own.

In addition to the information viewed on a user’s page, they also targeted apps and sites that allow you the option to log in using your Facebook account.

Facebook told users there is no need to reset their passwords or take any other precautions, and that no credit card information stored with the company was accessed. Cold comfort, but comfort nonetheless, I suppose.

Everyone deserves to feel safe when using social media. However, online bullying and harassment are sadly common and difficult to monitor, especially on massive networks like Facebook. To give users more control, the networking giant introduced a new safety feature this week.

Now, you can hide and delete multiple comments at a time on your posts. According to Facebook, “If you see a friend or family member being bullied or harassed, now you can report someone on their behalf via the menu above the post that you are concerned about.” Nice.

Starting today you can report bullying or harassment on FB on behalf of someone else and hide/delete multiple comments at once — all part of our work to help people stay safe on our platform. Here's more about the new steps we’re taking: https://t.co/qEEBXz3hHR

When Instagram co-founders Kevin Systrom and Mike Krieger announced last month that they were stepping down, some people worried about the future of the popular photo-sharing app. Well, worry no more!

Systrom and Krieger themselves hand picked Adam Moserri, previously the VP of Product, to take over as the new Head of Instagram. Mosseri was chosen for his deep understanding of the importance of community, as well as his expertise in design.

“We remain excited for the future of Instagram in the coming years as we transition from being leaders at Instagram to being just two users in a billion,” said Krieger and Systrom, “We’re confident that under Adam’s leadership, Instagram will evolve and improve and we look forward to the future of the product and community.”

Today is the end of an incredible chapter in our story. Our co-founders @kevin and @mikeyk are leaving the company they founded eight years ago. A new leader, Adam Mosseri, with a background in design and a love of simplicity and craft — two elements essential to Instagram — is now taking the reins. Congratulations and good luck @mosseri. And thank you Kevin and Mike for all that you have done for all of us. Thanks as well to our community of a billion for being part of this next chapter, too.

In the early months of 2017, Twitter introduced a feature that allowed publishers to place ads within their organic videos. Publishers prefer using video for their high engagement rates, which makes in-stream ads a no-brainer! And according to Vice President of Publisher Products Mike Park, “…publishers’ earnings from in-stream video ads more than doubled in the first half of this year compared to last.”

It’s no surprise that these same publishers lobbied the company for the option to monetize their video content outside their home markets! And Twitter listened. Good work, Twitter!

With almost 200 billion pins from which to choose, it’s no exaggeration that for many, Pinterest is the home of inspiration. In an effort to help users navigate through so much content, Pinterest has integrated a new “more ideas” tab that provides customized recommendations.

“With the “more ideas” tab on each of your board and sections, you can explore new recommendations inspired by the ideas you’ve already saved. You’ll see suggestions for new sections you can add to help organize your ideas.” said Pinterest.

We’re making it easier to bring the projects you’re planning to life, with personalized recommendations that match what you’ve been saving on Pinterest. Explore new recommendations inspired by the ideas you’ve already saved with the "more ideas" tab: https://t.co/JlqtJSXY5K

What happens when your dog accidentally gets out of the back yard? This lucky family’s pup goes straight to the front door, and, well, you’ll see…..! Good boy!!

And now for a tear jerker…