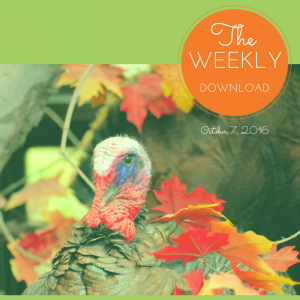 Gina here! This is a weekly download takeover. I’m in for Eden on this Canadian-holiday long weekend. I’m sharing some of the stories that caught my eye this week and some from our team. The leaves are slowly changing colour outside but inside we’re not yet cuddling up with Snuggies and Netflix yet, oh no. Canadians are undeniably glued to their TVs cheering on Toronto’s Blue Jays. Happy Thanksgiving!

I’m going to kick things off with the story of the beer-tossing fan from the Blue Jays wildcard game. Fans in Toronto reacted strongly against this suspect by sharing the police-issued photo so widely that I thought I was seeing the picture of a serious criminal in my newsfeed. The story dominated news headlines and by Thursday when he was charged with mischief, we were all wondering if we’d gone too far.

Who is Louise Delage?

From one is from Adrienne. At first glance Louise seems like the latest Instagram success. Perfect pictures, sharing unique experiences and garnering 16,000 followers in just a few months. But did you notice the common theme in her images? I did, but I wasn’t sure of the point at first. In every picture she has a drink in her hand or nearby. Is she a spokesperson for an alcoholic beverage? No. The message is more important than that. Turns out this is a campaign to raise awareness for alcohol addiction among a younger age group. I love how Addict Aide’s agency BETC used a relatable social media platform to get their message out on the down-low for several months before finally revealing its purpose. This is a form of awareness I’d like to see continue, not just for addiction, but for any social issue or charitable cause.

Google released the Pixel this week! For those who love to live in the Google ecosystem this is is basically a dream come true. Yes it looks a bit like an iPhone and it’s just as pricey but for Google fans who may be still be using loaner phones after their Note 7 exploded, it’s perfection. Did you order yours yet?

Melissa noticed the Possum update. How exciting/scary are algorithm updates, huh? Last week’s update had some local listings playing “possum” as improved filtering hides duplicate listings (think doctors in the same practice as an example). Other reported changes are the inclusion of listing on the outskirts of cities and that searcher location is now more important.

What’s Polished Man? Men are asked to paint one of their five nails to represent the 1in5 kids who suffer from physical or sexual violence. The campaign runs the whole month of October so what are you waiting for? Get that nail painted!

This story comes from Eden’s husband, Dave. The Rolling Stones are still huge and they’ve got the emojis to prove it. They announced their first album in 10 years, Blue & Lonesome, but check out this impressive list of emojis that could be used to unlock their tongue and lips logo – in blue of course – on Twitter. There are 17 different hashtags that could be used.

Just tweet your question with #RollingStones now to submit a question and tune in at 7pm UK time Weds Oct 12 for the answers. pic.twitter.com/LE9Qk2eYTR

Fox newscaster Brit Hume had the Internet in an uproar after the first presidential debate, and we want to make sure you see Outdoor Research’s response to GQ’s sexist climbing story.
John Greathouse’s article about women in tech in the Wall Street Journal has us wondering if we’re all timewarped back to the 1950s. This week’s tool tip comes from Kim Vallée – it’s an app for kids called Swift Playgrounds and our hashtag this week is #podcastday for International Podcast Day. And on a lighter note, we’ll end with a rendition of a song we’ve come to love, as sung by our friend Bob LeDrew. Have a listen and if you like it, please review Ada’s Sisters on iTunes.