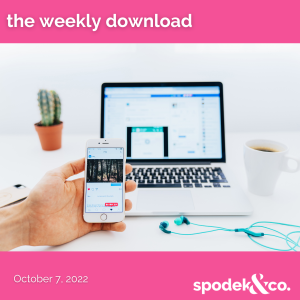 Hello, Friday! We’re so glad to see you. We’re looking forward to a Thanksgiving weekend of good food, family time, and reflections on gratitude — but first, let’s wrap up another busy week with a new edition of The Weekly Download.

On the docket today:

Facebook gives users a little more control of their feeds, Instagram tests new ad options, Twitter launches the first stage of its much-anticipated tweet editing feature, and LinkedIn makes it easier to create engaging, actionable content in-app. Plus, is there a new social network on the horizon?

Have you ever scrolled through Facebook and wished you could see a lot less of what your newsfeed typically shows you? You’re not alone, and Facebook is finally taking notice.

For the first time ever, the platform is allowing users to select “show more” or “show less” on posts recommended to them by the social network’s algorithm.

“Selecting Show more will temporarily increase the ranking score for that post and posts like it,” said a representative from Meta, Facebook’s parent company. “If you select Show less, you’ll temporarily decrease its ranking score. By offering more ways to incorporate direct feedback into Feed ranking, we’re making our artificial intelligence systems smarter and more responsive.”

It’s important to note that this new functionality is only a temporary solution. According to the company, they’ll also be testing the feature in Reels too.

In advance of the holiday season, Instagram is gearing up by introducing new ad surfaces and tools to help businesses reach more customers.

The first update includes new free, high-quality songs from the app’s Meta Sound Collection library. Businesses can manually select a song or allow the app to recommend the best music for an ad based on its content. Other updates (which might not be so popular with Instagram users) include new ad placements on the Explore page and in profile feeds, AI-powered multi-advertiser ads, and AR ads.

According to Instagram, the new ad surfaces and creative tools will give brands an easier way to create, tell their story, and grow their business.

After years and years of requests and speculation, Twitter is finally rolling out its new tweet editing feature with Twitter Blue subscribers in Canada, Australia, and New Zealand.

According to Social Media Today, the editing process is fairly straightforward, but there are some limitations: After posting a tweet, you’ll have a chance to make changes for the next 30 minutes. Users are allowed to make up to five edits to the original tweet within that time frame.

plus, a version history is available on every edited Tweet so you know what changed pic.twitter.com/E3eZSj7NsL

Are you eagerly awaiting a wider launch of this feature?

LinkedIn is making it easier for users and companies to create high-quality, engaging content.

The addition of post templates will allow users to select from pre-created, highly visual creative templates and to customize font, colours, text, and more to create a personalized post that stands out. And new clickable links will give users the ability to turn ordinary copy links into visual calls to action.

Brands will now have the ability to pin comments below their posts so they can “guide the conversation” they want to see, ensuring that anyone who sees the post will see the pinned comment first.

Lastly, LinkedIn’s new “featured commitments” page section allows organizations to showcase their most important values for potential job seekers and corporate partners. These commitments (five in total) will be featured prominently on a page’s About section.

Meet Fizz! Could it be the social media world’s new favourite app?

Haven’t heard of Fizz before? The new social media app is making headlines, and for good reason.

According to the company’s LinkedIn page, “Fizz is a private and authenticated platform designed to revolutionize the social fabric of communities, starting with colleges. After verifying a university email address, students use Fizz to post questions, memes, polls, and chat directly with other verified students, all while maintaining full control of their identity and privacy. Fizz communities are safe, authentic, and inclusive, made possible through community-based moderation.”

The exclusivity of the app certainly resembles another social network that got its start on a college campus, but that’s basically where the similarities end. Creators Teddy Solomon and Ashton Cofer were freshmen at Stanford in the fall of 2020 and felt a lot of disconnect and loneliness starting their new adventure during a global pandemic. So they set out to build an app by college students for college students, hoping it would help students form meaningful relationships on campus during a time when in-person socialization didn’t feel so safe.

According to TechCrunch, the anonymous, exclusive, Reddit-like app has gained popularity beyond Stanford (where approximately 95% of undergrads have downloaded it), on campuses including Rice, Elon, Dartmouth, Wake Forest, Chapman, and Tulane.

Fizz has plans to expand to more than 1,000 campuses by the end of next year.

Yup — we’re often guilty of this one too!

Greeting humans vs their dogs pic.twitter.com/NeGbEtd1n8

Wishing everyone in Canada a happy Thanksgiving weekend! For those of us who think baking pies is too complicated, a little inspiration: