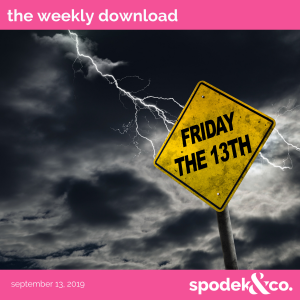 It might be Friday the 13th, but you’re about to get lucky! It’s time once again for The Weekly Download.

On the docket today: what’s new from Apple, how Facebook will pick the news you see in its app, Canada’s Bianca Andreescu’s amazing US Open win, how you can “date” Colonel Sanders (yes, really), the aftermath of an “insensitive” 9/11 Instagram caption, and more.

Everything New from Apple

There are lots of new products rolling out from Apple in the coming weeks/months, as announced at the company’s biggest event of the year, held this past Tuesday.

The iPhone 11, iPhone 11 pro and iPhone 11 Pro Max (phew, what a mouthful!) will be hitting shelves next Friday, September 20, and boast better cameras, improved battery life, and more.

Other new products added to the lineup: Apple Watch Series 5, a new iPad and the company’s much anticipated new streaming service, Apple TV Plus, which will launch November 1 and cost just $5 a month.

What product are you most excited about after watching Apple’s unveiling this week?

How Facebook Will Choose the News You See in its App

Facebook is close to introducing its ‘news tab’ to the platform, but people are curious as to how content will be curated for the new feature. Some of the guidelines that the company’s “news curators” will be following as they select news for the platform were released this week, and a few of them are surprising.

For starters, news curators won’t be allowed to censor or hide stories that are critical of Facebook – a very good thing, especially given some of the company’s ethical and technical failings as of late.

News stories with headlines that feature profanity won’t be allowed, nor will articles “constructed to provoke, divide, and polarize.” News curators will have to wait until two “whitelisted media outlets” have reported a breaking news story based on an “unsubstantiated report” before a story is included.

Lastly, local news outlets and stories with “on the record” sources will be prioritized by curators.

It’s true — you can now “date” the Colonel himself.

Thanks to a new dating game developed by KFC in collaboration with Psyop, I Love You Colonel Sanders! A Finger Lickin’ Good Dating Simulator, will allow users to “be the business partner of and win the heart of the most famous chicken salesman of all time…”

It’s a bit of fun, and another in a line of somewhat ridiculous (but effective!) marketing moves by KFC (remember the KFC hot tub?). And it’s gaining lots of traction and attention online. We’re sure the Colonel is smiling.

Bianca Andreescu Wins the US Open (and Our Hearts)

Nineteen year-old Canadian Bianca Andreescu was the talk of the internet this past week with her history making win over Serena Williams at the US Open finals last Saturday.

Since then, she’s become a national hero, snagging the keys to her hometown of Mississauga, making the rounds on daytime and late night television, owning the hashtag #SheTheNorth, and receiving shoutouts from fellow Canadians to congratulate her on her epic victory.

During an appearance on Jimmy Fallon, Andreescu smiled as she recounted all the fabulous Canadians who reached out to celebrate, including Shania Twain, Justin Trudeau, Steve Nash and Alessia Cara, but one famous Canuck was missing from the list.

We are happy to report that Drake finally made good, sending a congratulatory text to Andreescu that she happily read out loud during a press conference.

Reality star and fashion designer Kristin Cavallari has reportedly made some staffing changes after a social media manager posted a 9/11 caption on her Instagram account.

After Cavallari was labelled “insensitive” for the post, which featured her wearing a low-cut black dress posing in New York City with the caption “NYC for 24hrs. And what a time to be here… always remember”.

The post gained a lot of negative feedback from fans, like “Wrong picture for the sentiment in the post”, and “this is just disrespectful and undermining to the magnitude of the events that occurred on that horrific day”.

According to her team, Cavallari had approved a caption for the image, but it was not the one that ended up on her page. A statement was later released confirming “a staffer was fired”.

While the caption has since been edited, the comments still remain.

If you haven’t seen this video that’s making the rounds online yet, do yourself a favour and watch ASAP!