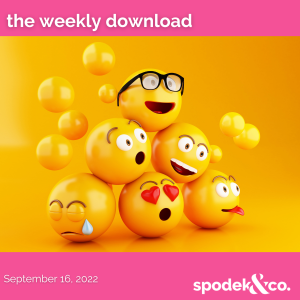 Happy Friday! Are you feeling the barest nip in the air as we track from late-late summer to early fall? We are, but all that means is that social media marketing is ramping back up. Read on for the Weekly Download.

Here’s what caught our eye this week: America’s favourite emoji; Instagram continues to highlight Reels with the addition of “Topics” in the upload process; Instagram also tests creator media kits; and Twitter is using the courts to force Elon Musk to uphold his offer to buy it.

There are two interesting pieces of emoji news this week. The first is that the Unicode Consortium has approved new emojis including maracas, jellyfish, goose, and more. Very cool.

Secondly, in its new annual Emoji Trend report, Adobe surveyed more than 5,000 U.S. emoji users to understand how, when, and why they post emojis. You’ll remember we had a similar report on Canadians’ favourite emoji.

To no one’s surprise, the crying laughing face is the most popular in the U.S. (and in Canada, btw). What is surprising is how other emojis are understood and used by different generations for communications. Some of the confusing ones? The cowboy-hat-wearing emoji and the cherries one. So, brands, take note of what to use and what to avoid.

We know Instagram is all in on Reels thanks to TikTok, the influencer in the social media platform ecosystem.

Instagram really wants people to post and engage with Reels, which is why it recently added topics to its Reels upload. The idea is that this will categorize the Reels so people can find them. Interested people can search by topic, increasing engagement in the format and with the creators.

It will also help the platform refine its recommendation algorithm.

Okay, brands, this is going to seem very familiar to you: media kits. You know them and how they work. They’re key when you’re going to work with creators. After all, you want to know their audience, their engagement metrics, and their rates before you decide to spend some of your marketing budget.

Instagram agrees. It’s testing a media kit option for creators. They’ll be able to create a bio and showcase their top posts, any collaborations, key analytics, and audience stats, all in one place. It’s very similar to Meta’s creator kit, which makes sense as Meta is the parent company of Instagram.

It is also similar to YouTube’s media kit, which launched earlier this year. TikTok, on the other hand, is figuring out how to monetize and share revenue with creators.

Looks like Mr. Musk might have to buy Twitter now. As you recall, Elon Musk alleged he had been misled about the number of bot and spam accounts on the platform after he announced his intent to buy Twitter.

He used that as a reason to back out of the deal. However, Twitter argues that the deal is still on. The shareholders have spoken, and now it looks like Twitter is going to use the courts to force Musk to adhere to the agreement.