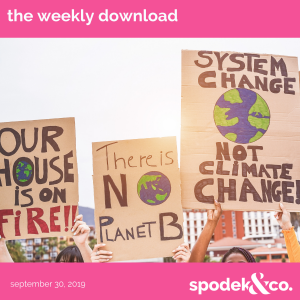 Welcome back! Fall has officially arrived, and so has another installment of The Weekly Download. Here’s what’s on the agenda today: Twitter’s new DM function, TikTok’s Chinese censorship efforts, how voter manipulation on social media has become a global issue, the fight against climate change, and much more.

As shared by social media expert Matt Navarra, Twitter is working on a new tool that will allow users to easily locate content — including tweets, images and links — that’s been shared within your direct messages.

In the new variation, tapping the “information” icon within a DM conversation will allow you to review a listing of all the content that has been shared between users or within a group.

It could be a handy way to keep track of your discussions, or pinpoint that random idea that popped up when you chatted with a friend the other day.

Two major B.C.-based brands closed their doors in support of scheduled climate strikes across the country.

Mountain Equipment Co-op (MEC) closed all its retail locations until 5 p.m. local time on Friday, September 27 to “support staff who choose to lend their voice to the movement.”

Lush Cosmetics also shuttered retail locations, as well as its website and manufacturing locations based in Vancouver and Toronto.

For both brands, giving staff a chance to contribute to the cause was a “no-brainer,” said Mark Wolverton, CEO of Lush Cosmetics.

According to several activist groups, at least 860 cities around the world were set to participate in the climate strike event last week.

Internal TikTok documents reviewed by The Guardian demonstrated that the popular video app was instructing moderators to censor content considered likely to anger the Chinese government.

The documents, which included TikTok moderator guidelines, broke infringing content into two categories: “violations” and “visible to self.” “Violations” would result in the content being taken down while “visible to self” content would only be viewable by the posting user, but invisible to all others on the app.

Content flagged “visible to self” included videos criticizing China’s socialist system, like demonizing/distorting local or other countries’ history, and “highly controversial topics” like religion and conflicts between ethnic groups.

According to a statement issued by ByteDance, TikTok’s parent company, in response to the document leak, the guidelines were “outdated” and had been abandoned back in May.

Voter Manipulation on Social Media is Now a Global Issue

New research by the Oxford Internet Institute has found that social media manipulation is getting worse, with more governments and political parties using social media algorithms and big data to twist public opinion — a finding that has huge implications for democracy.

According to TechCrunch, the report found that computational propaganda and social media manipulation have rapidly increased in recent years — by 150% — and suggests that the spreading of “fake news” has become the new normal for political actors across the globe.

“Although propaganda has always been a part of political discourse, the deep and wide ranging scope of these campaigns raise critical public interest concerns,” says the report.

Researchers go as far as to call these tools and techniques a “critical threat” to democracy.

Mark Humphries has created a helpline for all those upset at teenage climate activist Greta Thunberg for trying to save our planet (the horror!).

The satirical infomercial shows a call centre taking complaints from bitter grown-ups and it’s totally worth the watch.

THE GRETA THUNBERG HELPLINE:
For adults angry at a child. pic.twitter.com/JAtIKyG4Va

The only thing better than the infomercial itself is Greta’s on point response:

Hang in there! Help is available. https://t.co/aenieXxVut

The Greta Thunberg Helpline comes on the heels of a number of peaceful protests organized in support of action against climate change, inspired by none other than Thunberg herself.

How an Apple Watch Feature Saved this Mountain Biker

While not exactly “fun,” we think this story is pretty amazing.

A story making the rounds on Facebook by a user named Gabe Burdett details his account of how his dad’s Apple Watch saved his life this past weekend, thanks to a feature known as “hard fall detection.”

PSA: Last Sunday while trying to meet up with my dad for some mountain biking in Riverside State Park (MTB in RSP), I…

Do you have an Apple Watch? Did you know this feature existed? We love to hear stories about tech doing good!