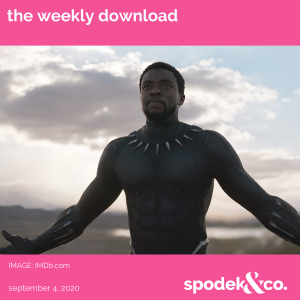 Welcome back to another edition of The Weekly Download! Let’s take a look at the week that was:

Moz Page Authority 2.0: What You Need to Know

According to Moz, the company is pioneering a new manner of calculating Page Authority to produce superior results. In the past, the system used SERPs alone to train the Page Authority model. The redefined training set will focus on the cumulative value of a page based on a number of metrics, including search traffic and cost per click. Moz says the new methodology will allow for better comparison between pages that don’t appear in the SERPs together.

Learn more about Page Authority 2.0 and some of its potential impacts here.

Twitter has announced a new initiative to make the platform more accessible for all users, a move the company said was spurred on following its test of voice Tweets earlier this summer.

In order to advance its accessibility features, Twitter is putting together an ‘Accessibility Center of Excellence’ and an ‘Experience Accessibility Team’. Twitter says that both teams will help the company keep accessibility at the forefront of the conversation when developing new elements and strategic approaches.

In a blog post from August 20 titled “Countering Hate on TikTok”, the company detailed five ways it is working to “diligently counter the spread of hate” on the platform, including evolving its hate speech policy, countering hateful speech, behaviour, and groups, and increasing cultural awareness in content moderation.

While the policy is great on paper, it’s not enough. There are still more steps that need to be taken across all social media platforms to combat hatred and bigotry and protect users.

A tweet announcing the devastating passing of beloved actor and activist Chadwick Boseman is now the most-liked tweet of all time. Twitter confirmed the accolade on Saturday with a fitting message:

"No one is born hating another person because of the color of his skin or his background or his religion…" pic.twitter.com/InZ58zkoAm

You Can Now Customize Your Facebook Watch Video Feed With #Topics

Thanks to a new feature called “Your Topics”, Facebook will allow users to tailor their Watch feeds to include more of the content they want to see.

.@Facebook #FacebookWatch follow #Topics. Haven’t noticed this before. Not on ‘Watch’ too often, is this new?? pic.twitter.com/YuG5xcn4I8

The new feature is rolling out slowly among users – have you tested out #Topics yet?

Did Chrissy Teigen know something about the year to come that we didn’t?

Nine months into 2020 and this picture definitely hits differently.

Share on FacebookShare on TwitterShare on Linked InShare by Email