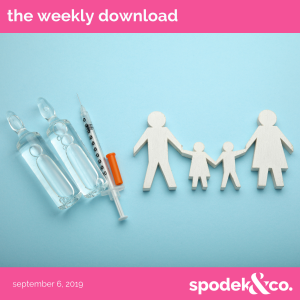 Here’s what you might’ve missed this week: lots of Facebook news – including new pop-up windows to stop the spread of misinformation, changes to the platform’s tagging feature, and another user data information leak. Plus, details about Twitter CEO Jack Dorsey’s account hack, and some mind-boggling Friday fun!

Last Friday, a slew of inappropriate and racist tweets were sent out by Twitter CEO Jack Dorsey after his account was compromised.

We won’t repost the hateful content here, but the inflammatory tweets stayed visible on his profile for about half an hour — garnered thousands of likes and retweets during that time — before they were eventually deleted. Yikes.

According to Twitter, the phone number associated with Dorsey’s account had been compromised because of a “security oversight” by a mobile phone company. The company says there was “no indication that Twitter’s systems have been compromised.”

Dorsey has come under fire in recent years for Twitter’s response (or lack thereof) to hate speech, extremism and harassment on the platform.

There’s a new feature on both Facebook and Instagram to help combat the spread of misinformation when it comes to vaccines.

According to CNN, Users in the United States will be prompted to connect with the US Centers for Disease Control and Prevention for credible information on vaccines. Users outside the US will be connected to the World Health Organization.

With many parents turning to social media to access health information and connect with other parents, the CDC says it can be difficult to determine what is accurate and who credible sources of information are.

The new feature will aim to combat “vaccine myths” and encourage consumption of accurate content.

After an historic $5 billion FTC fine, Facebook is changing the way it suggests tags for the photos you upload.

Previously, when you uploaded a photo to Facebook, the app would suggest potential people it identified in the photo for you to tag. Well, that’s now flipped! Instead, if you opt-in to face-recognition functionality, Facebook will suggest photos you should be tagged in (rather than suggesting those tags to whoever uploaded the photo) – basically putting the power back in your hands (rather than relying on AI) – and ensuring you’re not tagged in pics without your permission.

This change is subtle, but important — especially amid Facebook’s ongoing privacy concerns.

Oh, and speaking of Facebook’s ongoing privacy concerns…! Hundreds of millions of phone numbers linked to Facebook accounts were found online this week.

A server containing more than 419 million personal records over several databases was accessed — quite easily — because it wasn’t protected with a password.

Each record contained a user’s unique Facebook ID and the phone number listed on the account, making it easy to then discover the account’s username.

Some records also included the user’s name, gender, and location by country.

According to Facebook, the data set discovered online is “old” and appears to have information obtained before the company removed the ability to find others on the platform using their phone numbers. But the question remains as to who scraped this data and why.

These Moving Illusions Will Leave You Scratching Your Head

For Friday Fun this week, we’re sharing something a little different. This series of optical illusion animations are truly mind-boggling, and might make you rethink how you “see” the world! Click through to give your brain a fun challenge!