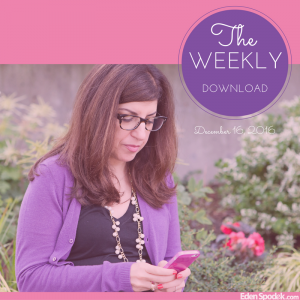 The number of new features released by social media platforms was almost overwhelming this week. The competition among leading platforms: Facebook, Twitter, LinkedIn, Instagram and Snapchat is fierce and it shows in how keen they are to stay ahead. There’s lots more in the Weekly Download including some fun videos so let’s go!

Have you ever wanted to curate your own Moments on Twitter? Now you can – right from your phone. This is an opportunity for conference organizers and attendees, event hosts, and for large-scale product launches to curate top tweets that highlight events and products in a strategic way.

Snapchat released four new features this week. The most anticipated was definitely Group Chat which users have been asking for. Does this make Snapchat everyone’s favourite social app?

Instagram has started to roll out live video to all users, starting with the U.S. It’s a little Snapchat-esque in that you need to watch the video while it’s live or bust. But then again, aren’t most new Instagram features somewhat Snapchat-esque these days? The video disappears once the broadcast is over. Have you watched any Instagram Live videos yet? Have you made any of your own?

Emmy Rossum was offered pay equal to her male co-star, William H. Macy, for the 8th season of “Shameless” but when she asks for equal pay, she really means it. Before committing to the next season she’s asked for pay that would make up for having been underpaid for the last seven seasons. If you’re a fan, you’ll know how critical her character, Fiona, has been to the success of the show. If she gets what she wants, it will set a new precedent for working women. Read more.

Get out the Kleenex! WestJet nails the holiday tear jerker again this year by featuring residents from Fort McMurray, Alberta whose lives were turned upside down by the tragic wildfires earlier this year.

Toronto’s first snowfall of the season

Toronto had its first big snowfall of the season this week. Amidst all the complaining about shoveling sidewalks and colder temps, the Toronto Zoo shared this adorable video of a panda cub playing in the snow.

Food emojis for everyone!
I know what you’ve been thinking, finally an avocado emoji! Bon Appetit also shared a video tutorial of how to create food emojis IRL for an extra bit of fun. = Let’s get brunch.

Hilarious Twitter account
If you haven’t seen the tweets yet, now is the time. Read the 25 funniest tweets from “Definitely not a wolf pretending to be a man”…before it’s time to brace for the season of death.

Have you finished your holiday shopping yet? If you’re ordering clothes online, you may want to check out what Canada Post is doing in Vancouver. And as part of another smart move involving Canada, the entire internet will be archived here to protect it from the U.S. President Elect. Interesting times, including the fact that Stephani Renae Lawson is going to jail for creating a fake Facebook account to frame her ex. She gives all the women legitimately being harassed online a bad name. And in other news… the results of the annual Ellevate Impact Survey are here so let’s talk about the latest research about professional women in the workplace.While we’re on the subject of women’s careers, we must mention the good work HoHoTO has been doing and our tool tip this week is about BusyBot! Listen up and enjoy!