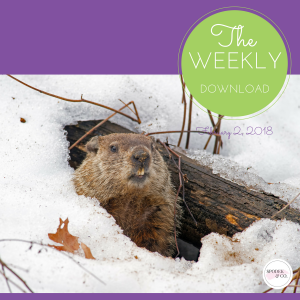 It’s Friday, and it’s Groundhog Day! Whether our furry friend sees his shadow or not today, we’re optimistically awaiting spring and some warmer weather.

On the docket today: the achievements of this year’s Bell Let’s Talk campaign, Canada’s proposed policy on inaccurate search results, cryptocurrency, big changes for businesses on Instagram, and some Super Bowl Friday Fun.

Mental health affects all of us and we need to talk about it. If you’re struggling, you’re not alone. There is help, so I hope that you will reach out. #BellLetsTalk – Céline xx…https://t.co/9FyFadfAiI

Mental health is important all year round and as today is #BellLetsTalk Day, let's take this opportunity to help end the stigma surrounding mental illness and support mental health initiatives.

You are not alone. #BellLetsTalk pic.twitter.com/bcPHif0n9d

Do you think you should have a right to accurate, complete and current information when searching online?
A new policy is being proposed by the Office of the Privacy Commissioner of Canada that would change inaccurate search engine results in Canada. A similar framework introduced by the European Union has been criticized for its potential to affect free expression.

The policy would encourage the publication of undistorted information. In cases where it’s not possible or practical for information to be modified or corrected, two remedies are suggested:

De-indexing, which would require search engines such as Google, Bing, or Yahoo to remove links to pages that have been deemed inaccurate or inappropriate under the definition of Canada’s Personal Information Protection and Electronic Documents Act.

Source takedown, as the name implies, would require a website or social media platform to remove inaccurate or inappropriate content from the internet completely.

While the policy isn’t final, the commissioner plans to hold further consultations before finalizing a position. We’ll be keeping a close eye on developments and their impact on reputation management and search.

Cryptocurrency – a digital currency that relies on encryption to regulate the generation of units of currency and verify the transfer of funds – is something we hear about pretty often these days.

This week, Ontario pension giant OMERS announced they’re pushing further into the rapidly expanding cryptocurrency business through the creation of an Ethereum-focused public company that is planning to raise $50-million.

The pension fund, the first in Canada to invest sizeable amounts into Canada’s technology sector following the 2008-09 recession, has already made a handful of small bets on cryptocurrency. Its latest move is an attempt to build a meaningful business around a platform known as Ethereum, which was invented by Canadian Vitalik Buterin.

And speaking of cryptocurrency, Facebook has made a move to ban ads related to the digital currency, including bitcoin and initial coin offerings.

Facebook says the policy is designed to protect Facebook’s more than one billion users from “ads that promote financial products and services that are frequently associated with misleading or deceptive promotional practices.”
What’s unclear is whether or not this policy will have any real effect on cryptocurrencies, who rely on channels like Reddit and Twitter for marketing.

Huge news this week for brands on Instagram – a change to the app will now allow brands to:

The new scheduling capability means that brands can pre-plan and manage large volumes of content, something we’ve been eager to see come into play for ages!

More news from Instagram this week – the length of Story ads in carousel format have tripled in an effort to help brands tell better stories.

Select brands like Netflix and Paramount have begun testing a new ad format that allows for greater viewing time on the platform. While there’s no timeline for when the feature will be available to other brands, the goal is to enable brands to get more creative with their campaigns and removing the pressure to squeeze everything into one 15-second video.

For now, brands will only be able to include up to three posts in a carousel ad within Stories, but Instagram may eventually increase the number, depending on how brands and people respond to the initial version of these expanded ads, says Instagram.

Sunday marks Super Bowl LII! Whether you’re interested in the game, the food or the halftime show, there’s a little something for everyone. We’re having a good chuckle at some of these teaser commercials released this week.