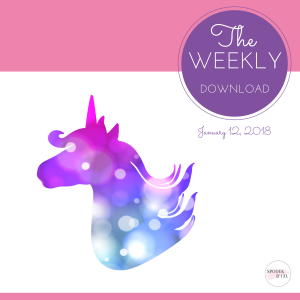 Brand missteps, unicorns (not the kind you might think!) and changing algorithms – this week’s instalment of The Weekly Download has it all!

In appalling brand news, H&M takes the cake this week.

After an advertisement for a child’s hoodie went viral, several people, including Canadian superstar The Weeknd, took to the internet to share their shock and disgust.

woke up this morning shocked and embarrassed by this photo. i’m deeply offended and will not be working with @hm anymore… pic.twitter.com/P3023iYzAb

The ad, which featured a black child modelling a sweater that read “coolest monkey in the jungle,” was removed from all marketing and sparked an apology from the retailer following the outrage.

Other celebs who spoke out against the ad included Diddy and LeBron James.

Mark Zuckerberg told us that in 2018, he wants to “fix” Facebook. This week, Facebook shared that they’ll be changing the way our News Feeds work in order to promote “meaningful” interactions.

Posts that generate discussion will be promoted over those that are passively consumed. Facebook says this is an attempt to make users feel better about using the app. Says CEO Zuckerberg, “We feel a responsibility to make sure our services aren’t just fun to use, but also good for people’s well-being.”

The algorithm will promote the posts that people might want to actually react to – quests for recommendations, friends seeking advice, or news articles.

Just how groundbreaking will these changes really be? Only time will tell. Zuckerberg says he expects that people will be spending less (but more meaningful) time on the social network as a result.

Do you use Canva? We love it! It’s an awesome tool for online design and publishing that can help anyone make professional and fun graphics. According to the company, 13 new designs are created on Canva every second.
Canva is Australia’s first unicorn of 2018, after raising $40 million (AUD$50.9 million) to push the design startup’s value over $1 billion. If you haven’t heard the term before, a unicorn is a startup company valued at $1 billion.
Launched in 2012 by CEO and co-founder Melanie Perkins, Canva is now available in 190 countries and boasts over 10 million users. Perkins is now the youngest female entrepreneur to ever reach unicorn status.

Last week, we talked about YouTube’s inaction in response to disturbing content posted by creator Logan Paul after a visit to Aokigahara, also known as Japan’s suicide forest. This week, the Google-owned company has made moves to reduce its ties with the vlogger.

Paul will be taken off Google Preferred, YouTube’s premium ad program that gives brands access to popular channels. It’s not clear, however, if he’s still part of YouTube’s Partner Program that enables creators with more than 10,000 channel views to make money from a broader range of advertisers. YouTube says it’s also halted a number of projects it had lined up for Paul.

So, what are your thoughts? Is the punishment adequate, or should YouTube have taken a stronger stance to set an example?

Integrated tech is the biggest trend at this year’s CES

CES 2018 kicked off this week and there’s lots of cool gadgets making headlines.

Some of the most notable new tech gadgets include the Kohler Numi, an internet-connected toilet (yep), Foldimate and Laundroid, robots that fold your laundry (sign us up!), and INVI, a bracelet to fight assault.

It’s definitely been a weird week weather-wise. This viral video making the rounds might remind you to throw some ice melter down before heading to work in the morning!