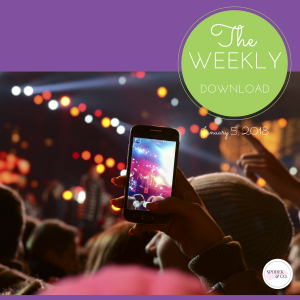 Welcome to our first edition of The Weekly Download for 2018!

Today we’ve got an eclectic mix of news for you, including Mark Zuckerberg’s New Year’s resolution, how to preserve your iPhone’s battery life, YouTube’s latest scandal, a behind-the-scenes look at content in the making, and of course, some Friday Fun.

The numbers in – this year, more than 10 million Facebook users went live to ring in 2018.
According to data released this week, the social network saw a 47% increase in Facebook Live broadcasts where users were able to add live augmented reality effects like 2018 glasses and party hats.

While Facebook didn’t share how many users tuned in to those live broadcasts, those that did were most likely to use the “wow” reaction. Did you go live to celebrate 2018?

Did you set personal or professional resolutions for 2018? Mark Zuckerberg did.
After much recent scrutiny, Facebook’s founder and CEO has committed to “fixing” Facebook in 2018. In a personal post on the platform, Zuckerberg said he’s made too many errors enforcing policies and preventing misuse of its tools.

Other important issues he wants to tackle include “protecting our community from abuse and hate, defending against interference by nation states, or making sure that time spent on Facebook is time well spent”.

After encountering a victim’s body hanging from a tree, Paul did not stop filming. Instead, he took close up footage of the victim while making several jokes. Not only was the video extremely disturbing and offensive to the victim and their loved ones, it was arguably inconsiderate of those struggling with mental health.

It didn’t take long for the video to amass more than six million views and stir up outrage online toward both Paul for his content and YouTube for its policies. Although the video violated YouTube’s community standards, it was never removed by the platform. Now, YouTube finds itself wrapped in another controversy over its inability to police offensive and disturbing content on its platform and its system that rewards creators with outrageous content.

Although YouTube has since issued a statement, it’s been criticized by many for being vague and not addressing how the platform plans to prevent similar instances from occurring in the future. Just one more instance of the community speaking out about the responsibilities of social networks.

Capturing the power of social media from an office window

Christopher Cheung, reporter and page editor at the Tyee, posted a unique article this week that took a new perspective on the power of social media. Cheung’s article takes a backstage look at Instagram creators and the content they produce from the rooftop visible from his office window.

From professional photographers with DSLR cameras to teenagers with a keen sense of personal style and iPhones, Cheung has captured behind-the-scenes looks at their content in the making with his Instagram account @lotspotting.

Cheung’s article is a reminder of the fact that great content can be found anywhere – you never know what spaces in your everyday life might go viral.

How navigation apps are turning quiet streets into traffic nightmares

High traffic in these typically quiet areas has become such a problem that boroughs like Leonia, NJ are fighting back. As of mid-January, Leonia’s local police force will be closing its 60 streets to all drivers except for residents and those employed in the area.

According to Leonia’s chief of police, an influx of some 250,000 “Wazers” on the roads in the morning isn’t uncommon in the area, causing extreme congestion in the borough.

It’s a side to navigation apps that we don’t normally consider when applauding their usefulness. How many times have you taken a small side street to avoid an accident or backup of cars?

Get the most out of your iPhone battery

Batteries found in Apple’s iPhones have been a hot topic of conversation recently. It turns out, we’ve all been charging our iPhones wrong.

A recent article published maintains that the best way to charge your iPhone to preserve its battery health is to charge it a little at a time, not all at once. Another mistake – letting your battery reach 0% before plugging it in to charge. The experts say keeping your phone between 65%-75% is key to long-lasting battery health.
For more tips and tricks to preserve your iPhone’s battery life, check out the full article.

That’s right – cross-posting might soon be allowed between your favourite apps.

Did you get a Google Home for Chanukah or Christmas? This grandmother did. And a video that’s been going around the web of her learning to use her new smart device is touching our hearts and putting a big smile on a lot of faces. We’ll have more to share about voice search over the coming months as devices such as Google Home and Alexa have recently found there way into Canada.