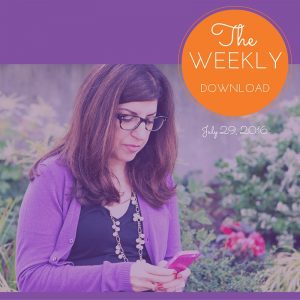 Well, it may be vacation time but when it comes to what’s been happening, you can forget about those lazy days of summer. What have you been up to? Between July 13 and 25, I spent four days in each of Midtown Manhattan and Nova Scotia’s South Shore region, with work in between of course. 🙂

As you know, there’s a tonne of business happening in the online world and constant buzz about the upcoming U.S. election now that both national conventions have wrapped up. The two party leaders and Brexit, give a whole new meaning to a country divided.

There’s been a lot of speculation about Yahoo!’s fate over the past couple years. Although the company hasn’t been able to compete with Google in search, it does have some valuable assets that Verizon wants to combine with the AOL purchase it made last year. Yahoo! CEO Melissa Mayer has gone on record as stating that the company’s struggles are somewhat the result of gender bias. If you’ve been following tech news you’ll know she’s faced a lot of criticism and held to a higher standard than her male counterparts at other tech companies.

“I’ve tried to be gender-blind and believe tech is a gender-neutral zone but do think there has been gender-charged reporting,” she said. “We all see the things that only plague women leaders, like articles that focus on their appearance, like Hillary Clinton sporting a new pantsuit. I think all women are aware of that, but I had hoped in 2015 and 2016 that I would see fewer articles like that. It’s a shame.” – Financial Times, July 25, 2016

There’s a point to all this so please stay with me… A long-time feud has been brewing between Kimye (Kim Kardashian West and her husband Kanye West) and Taytay (Taylor Swift). I avoid the Kardashians at all costs and if I’d have to pick a side, I’d choose Taytay but I digress. The Karsdashians aren’t known for keeping things to themselves. So, after last Sunday’s episode of KUWTK, when Kim decided to release a video (an edited video) on Snapchat of a conversation between her husband and Taylor Swift regarding the lyrics to the song Famous he wrote about Swift, the you-know-what hit the proverbial fan. The feud lit up social media crossing at least three platforms: the aforementioned Snapchat, Twitter and Instagram. On Twitter Khloe Kardashian joined in to support her sister while Selena Gomez chimed in to support her friend Taytay. Taylor took to Instagram to speak her mind about the situation. Regardless of whether or not you care or have been following this feud, what’s interesting is how platform agnostic it’s become with all parties tweeting as well using their platform of choice. Check out this heat map and see how the conversations about Ms. Kimye exploded on Twitter Sunday evening.

Montreal Fashion Week Coming to a Screen Near You
As many are saddened by the end of Toronto Fashion Week, there’s new hope as Digital Fashion Week Montreal will launch March 2017. Founder Melanie Trevett and other members of the organizing team aim to “re-writing the fashion week business model” by disrupting the fashion industry and livestreaming the whole event in order to reach a global audience.
Canadian Screen Awards Going Digital
This week, the Academy of Canadian Cinema & Television announced it will be launching the inaugural Canadian Screen Awards Gala honouring Excellence in Digital and Immersive Storytelling next March. New awards categories will be in digital and immersive media honouring directing, acting, best “immersive” experience and a social innovator award. Submissions are being accepted through August 17.

Twitter is testing a new design for composing iOS tweets on their iPhone apps. Some people are randomly being served up the new design that is similar to the web-based version of Twitter, where there’s a compose field at the top of the timeline. According to Mashable, here’s what a Twitter spokesperson had to say,
“We want to make it easy for anyone to Tweet. To that end, we’re experimenting with ways to make the Tweet compose bar easier to access on Twitter for iOS, similar to the experience on Twitter.com.” Have you been seeing the new composer design? What do you think?

The Summer Olympics and Social Media

Who Gets my Vote

I know, I know. I’m Canadian and won’t be voting in this year’s presidential election but if I’d vote for FLOTUS. Did you see her speech at the DNC? Wow!

Angela and I thought the UK’s Metro story about Prime Minister Theresa May’s husband was so on point it sang and we are thrilled that Angela Lindow has won the first James Golick grant for women in Computology. We’re 100% behind Twitter’s lifetime ban on Milo Yiannopoulos for leading that hate campaign against Ghostbuster Leslie Jones. Two hashtags this week on that topic: #loveforlesliej and #TheFutureISFemale. I explain why I’ve gone all-in on the Canva iPhone App and we’ll talk about the brave images Shannen Doherty posted on Instagram tracking her battle against breast cancer. Listen up!