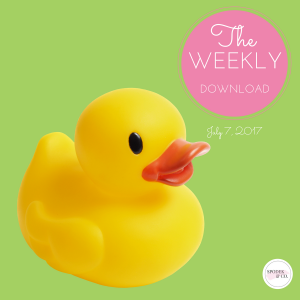 Happy Friday, everyone! We’re kicking off the first official week of July with a mixed bag of updates — from Toronto’s giant rubber duck to xennials, AI and AR, YouTube’s Uptime and more.

The big yellow duck that caused quite the controversy earlier this year settled into its temporary home at Toronto’s harbourfront last week. The $200,000 inflatable duck’s visit was short lived — word is it has moved north to Parry Sound after being unveiled on Canada Day. If nothing else, it made for some great social media posts. Did you get a chance to check it out? Let’s see those pics!

Universities and colleges take note — the bar for post-secondary acceptance letters has been raised. The Northwestern Polytechnical University (NPU) in China is issuing its letters of acceptance to students using augmented reality.

After downloading NPU’s AR app, students will be able to see a virtual model of the university, discover more about its history and learn about the subjects the school is famous for — aeronautical, astronautical and marine engineering fields to name a few. The concept appears to be a world first. What do you think? Would a hi-tech acceptance letter sway your post-secondary commitments?

YouTube’s experimental app, Uptime, has now opened up to all users. The app allows you watch videos with friends while reacting and commenting and is being described as a more social and interactive way to watch YouTube. With Uptime, users can discover and share videos with friends without ever leaving the app. Watch with your friends in real time, or join later to see others’ reactions to the videos played back as they watch. Complete with emoji reactions, Uptime has a lively and interactive feel even when you’re watching alone.

It seems like Snapchat is rolling out updates almost every week — and this week is no exception. Released in an update on Wednesday, the app will now let you add links, voice filters, and backdrops to your snaps to take your creativity to the next level.

Paperclip allows you attach a link to a Snap that friends can swipe up to open in Snapchat’s internal browser — something only ad campaigns and Discover content could do until now.

Backdrops lets you cut out an object from your Snap and put a colorful or creative pattern behind it to make it stand out.

With Voice Filters, you can remix the sound of voices in your Snaps. Previously, voice filters were only part of built-in filters. It’s predicted that the new feature will open up more opportunities for storytelling.
The update keeps Snapchat one step ahead of Instagram, but based on their track record, we bet Instagram’s update isn’t far behind.

DeepMind, Google’s artificial intelligence research branch, is launching a team at the University of Alberta in Canada. Surprised that Google has chosen the great white north as its new home?

Turns out, Canadian policies are more attractive than the US’s when it comes to AI — the Canadian government has committed to spending $100 million to help develop AI. There’s also President Trump’s travel ban to consider, which may make it more difficult for tech and academic talent to enter the country.

A new micro generation is making headlines this week — say hello to the xennials. Defined as the generation born between 1977 and 1983, xennials fall somewhere on the spectrum between the “pessimistic gen-X” and “optimistic millennial”. According to Dan Woodman, associate professor of sociology at the University of Melbourne, a key defining factor of the xennial is their interaction with technology. Xennials had technology-free childhoods and teenage years and were into their 20s before experiencing the social media and tech boom.

We should photoshop me over his yearbook picture next. #DontMessWithGabi https://t.co/o0qFBXvSNi

The Rubber Duck From Space