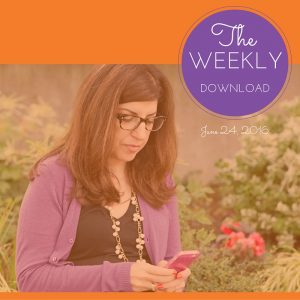 Summer is here. I’m writing this from the tranquility of my back deck listening to birds chirping and thinking of an ocean breeze. Can’t a girl can dream? Here’s some stories about digital communications that caught my eye over. As always, I want to hear your comments about these topics too and please let me know if there are specific topics you’d like covered here.
Here’s what’s been filling up my news feed:

Did you know that Facebook predicts the written word will be replaced by hipper images and video on its platform within five years? That’s what Nicola Mendelson said recently. She leads Facebook’s operations in Africa, Europe and the Middle East. Ann Handley, who is a brilliant writer, co-author of Content Rules (the textbook we use in class) and author of Everybody Writes, didn’t let Mendelson’s comment go unchallenged. She’s Calling BS on Facebook’s Edict That Writing is Dead. So, what do you think? Are you on Team Nicola or Team Ann?

Not to miss out on the action, on Tuesday Tumblr – the microblogging and social networking platform – launched a series of livestreamed teasers on Tumblr Staff introducing Tumblr Live Video. Tumblr isn’t creating its own livestream capabilities but rather enabling Tumblr community members to integrate other livestreaming services into the their personal Tumblrs through Tumblr’s platform.

Join my FREE Webinar so I can tell you so much more.

The A to Z Blueprint For Planning, Building and Launching
a CROWDFUNDING CAMPAIGN
That Will Flood Your Project With Fans and Backers

This week’s episode is a another one from the archives and timely because Sting is returning to Toronto next week. Toronto’s own Freshbooks has an innovative new way to build teams — they’re setting up blind dates between their employees. And speaking of dating, we have thoughts about Katerina Lyadova’s approach — to hire someone as her dating profile manager — for $12 an hour. Who knew that the price of love was so low? Have you tried Mashfeed yet? It’s a newish app that’s great for curating hashtags from Twitter and Instagram.

Sting is scheduled to play at the NBA All-Star’s halftime show and the folks on Twitter do NOT approve. And if you haven’t heard of Heartmob, it’s time to get up to speed. The recently Kickstart-ed project promises to fight online harassment by offering real-time support, a place to upload and store evidence of the harassment and much more. Have a listen!