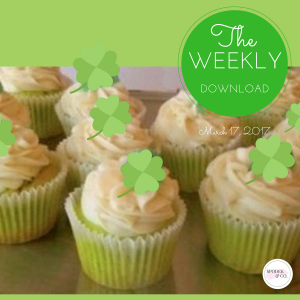 “Wherever you go and whatever you do, may the luck of the Irish be there with you.”
~ Irish Proverb

Happy St. Patrick’s Day! Today is the day when we are all a wee bit Irish…or at least it’s the excuse we use to drink green beer and wear leprechaun hats. Something you may not know about me is that for many years as wee little one, there was an Irish family who provided home daycare for my sister and I. They taught us all about their traditions and culture. As an adult, I’ve learned to love movies set in Ireland. If you haven’t seen Sing Street, tonight may be a good time to watch after you’ve had enough green beer. But before you head off to do your Irish jig, take a read of some of the digital stories that caught my eye this week, and of course, some Friday fun thrown into the mix, too.

It can be tempting to sneak in a trending hashtag to promote your own agenda, but in some cases it’s in complete poor taste. Never in any situation is it okay to hijack a hashtag that is meant for emergencies. But two Ontario real estate agents are now under investigation by the provincial real estate council after issuing tweets that included #AmberAlert — a hashtag trending last Friday after a car in Toronto was stolen with a four-year-old girl inside it. They used the #AmberAlert hashtag for blatant self-promotion about their listings. The tweets were later removed and an apology issued, but not without damage to their reputation.

When is it Okay to Ask About Compensation?

It’s often one of the first things on our minds when we’re interviewed for a new job: how much will it pay? But when this candidate asked the question, she was dropped from a second interview and given what she considered a harsh response. I’m on the fence about when it right to ask this question, but would agree that the response was unprofessional. What are your thoughts?

20 Tweets That Sum Up St. Patrick’s Day For Parents

If you’re a parent, you can relate to these hilarious tweets that sum up the different St. Paddy’s Day experience you’ll have. From Pinterest fails to Lucky Charms disasters, the day takes on a whole a new meaning.

As a special treat for St. Patrick's Day, my kids will get to eat Lucky Charms for breakfast.
Just kidding. They eat them every morning.

Sing Street – Drive It Like You Stole It (Official Video)

There’s another new episode this week with lots to share. We have to tell you about PEANUT – a new app that connects lonely mothers. And we’re so impressed with Lego’s career women figurines for women of NASA.We’re less impressed by the Wildrose on Campus email comparing feminism to cancer. This year’s clever Google Fortune Telling app is something we want to point out, and also this fourth-grade feminist group. With International Women’s Day last week we read a lot of stories about women in tech finding their place at the table. Just a reminder that EVERY day with Ada’s Sisters is International Women’s Day!