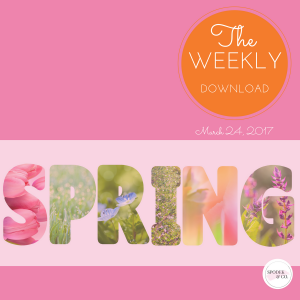 The calendar turned to my favourite season this week. Hello Spring! Let’s hope there aren’t any more wintery surprises by mother nature. The sun and milder temps definitely have a way of making me feel more refreshed, energized and positive. How about you? On that note, let’s see what’s new in digital stories this week.

We Are Not Afraid

Our hearts go out to London this week following the Wednesday’s tragic bombing attack on Westminster. As you’ve probably already seen, people have flocked to social media to share their sorrow and messages of hope.

And one of our favourite Londoners, James Corden, shared a special message on his show Wednesday evening

What do Tina Fey, Alec Baldwin, Tracy Morgan, Tom Hanks, Padma Lakshmi, Jon Hamm and Amy Poehler have in common? They’re fighting back against fears that Trump’s administration will try to curtail U.S. civil rights. They, along with many other A-listers, have signed up to raise money for the American Civil Liberties Union next Friday as part of a telethon that will be streamed live on Facebook. What do you think of this modern-day telethon format? It will certainly break down borders and improve accessibility to the telethon. It will be interesting to see if that translates into more donations.

Ever get those pesky followers who turn out to be naked or half-dressed people using sex to sell their products or services on Instagram? What about scrolling through your Instagram feed with a client or child over your shoulder only to learn someone you’re following has posted something a bit “sensitive”? Well, yesterday, Instagram announced a new feature to save some eyes from burning. For photos and videos deemed “sensitive”, Instagram will add a filter that requires the viewer to click on the words “See photo” on the bottom of the photo/video screen before you can see the content. And if you want to meet some fellow Instagrammers in person, you can attend WorldWide InstaMeet 15 this weekend. It’s an opportunity for Instagrammers around the world to share stories of kindness in their feeds.

We’ve become all too accustomed to Apple’s splashy launches so when a new iPad quietly comes onto the market, it’s easy to wonder why. The newest tablet dropped the Air name and got a $70 price drop along with some new bells and whistles… but it was announced via press release with little fanfare this week. The reason lies in the numbers. Tablet sales have fallen dramatically with iPad sales faring even worse. It makes me wonder: are our smartphones so smart and so awesome now that we can’t even be bothered with a tablet anymore?

If you haven’t already read Wild by Cheryl Strayed, put it on your reading list NOW! It’s one of my favourite memoirs (and reads more like a novel). A few years ago, my friend Michelle Kostya introduced to the book Tiny Beautiful Things: Advice on Love and Life from Dear Sugar, a collection of excerpts from Strayed’s Dear Sugar advice column. What began as a talk radio show with Strayed and co-host Steve Almond, has become a popular NPR podcast by the same name.