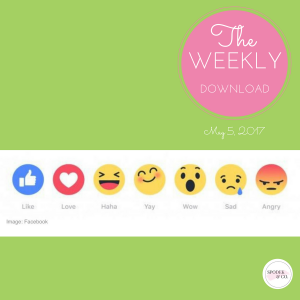 Happy Cinco de Mayo! Will you be celebrating? Here’s a fun fact for your Friday: Americans consume 81 million pounds of avocado on Cinco de Mayo. That’s a whole lot of guacamole! And for a celebration of a different kind, will you be geeking out with Guardians of the Galaxy Vol. 2 this weekend? We’re saving it for Mother’s Day weekend, ’can’t wait!

We all know and love Google Docs for so many reasons – its ability to help us connect and collaborate on awesome ideas being one. This week, someone hit the internet with a Google Doc phishing attack designed to gain authorization access to Google accounts.

The good news? It seems like Google’s got it all under control. They’ve disabled the link and removed the fake pages, although the extent of damage caused isn’t clear yet. If you think you might have been a victim, follow these instructions to protect your account.

We've addressed the issue with a phishing email claiming to be Google Docs. If you think you were affected, visit https://t.co/O68nQjFhBL. pic.twitter.com/AtlX6oNZaf

13 Reasons Why: The discomfort we feel is good

Netflix’s 13 Reasons Why has been making headlines and filling up our social media feeds since it was released on March 31. Based on a novel, the dark 13-episode drama tells the story of highschooler Hannah Baker and her life leading up to her suicide.

While many have been critical about the way the show portrays bullying, sexual assault and suicide, it’s not all bad; a new article published this week focuses on the positive lessons that 13 Reasons Why teaches from the perspective of a young adult. (Full disclosure: he’s my son and hired by the Globe and Mail to write the article. #proudmom)

One of the article’s most important points: we could all stand to feel a little uncomfortable sometimes. The series’ troubling scenes and the resulting feelings of emotional pain and discomfort help to convey the message that these are very real and horrific issues.

Facebook is at it again: the social network has added a feature that will allow you to not only “like” posts and messages, but also comments.

To add a reaction, hover over the “like” button and choose from five emotions: like, love, haha, wow, sad and angry.

Emoji overkill? Or another fun way to express ourselves? And what does this additional level of interaction hold for brands and businesses? 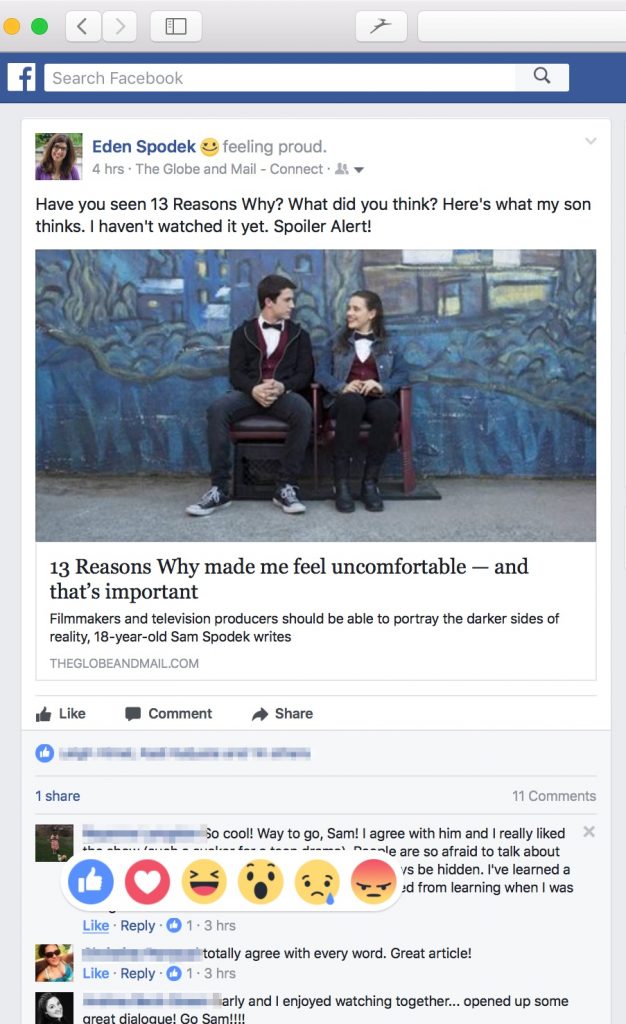 On a personal note, I’m so excited to be part of the inaugural team for The Big Push. It’s a business accelerator led by women that positions startups by women founders for Series A funding. For more info, check out thebigpush.ca.

This one has had a lot of buzz surrounding it lately and looks like it just may be the hit sleeper this summer.

Binge worthy with 76 episodes on Netflix. Be careful, it’s addictive. 🙂

Sometimes truth is stranger than fiction and these days, when it comes to politics, some of us would prefer fiction. Are you a fan of The West Wing? This popular podcast co-hosted by Joshua Malina (aka U.S. Attorney General David Rosen on Scandal) and musician/composer and self-described news junkie, Hrishikesh Hirway.

Shownotes: For this episode, we’re joined once again by Janel Moloney (@NellyMoloney), who was nominated for a Best Supporting Actress Emmy in part for her performance in this episode. Alas, she did not help us learn to tie a proper bow tie. (At the end of the podcast episode, you want to be able to pull it open, like Tony Bennett.)