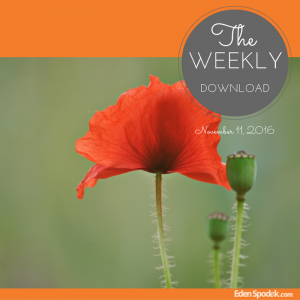 To say this has been an interesting week is putting it mildly. Needless to say, you’ve probably seen more than your fair share of U.S. election coverage, so… today I’m sharing some things that you may have missed in all the hoopla.

This Remembrance Day Show Your Respect

First and foremost, today is Remembrance Day. Please take few minutes to remember those who fought for our freedom. Here’s a story I wrote about my conversation with a WWII veteran in 2014. I haven’t seen him in the same spot the past two years and can’t help but wonder if he’s okay. Lest We Forget.

Kickstarter Live Brings Founders and Backers Together in Real Time

Kickstarter launched Kickstarter Live allowing founders and creators to engage with their backers (and prospective backers) in real time. Replays are archived so they can be accessed anytime. This feature is brand new but I did have a chance to catch a few including one from Elan Lee of Exploding Kittens fame, about his campaign for Bear vs. Babies, a new card game. Check out the replay. If you’re considering using Kickstarter Live, here’s a couple tips based on my observations to date:

Instagram added three new (and much wanted) features to Instagram Stories this week. Now people with verified Instagram accounts can add URLs to your stories so you won’t have to leave Instagram. With the click of a link, a button opens up within a browser taking you to a website or page. Hopefully this feature will be extended to all Instagrammers soon. You can “@” mention someone in your story and no, you don’t need a verified account to do so. And, Instagram is now including the ability to add a Boomerang to your story without having do so in separately using the Boomerang app. According to TechCrunch, the Boomerang feature isn’t available for regular Instagram. Check out their story for more details and how-tos.

In Social Media, Everyone is Watching

Did you have tickets to see Amy Schumer this week? I did but like thousands of the other Canadians, I have to wait until next February to see her. Why? Well, according to her Instagram post on Tuesday (Election Day), she lost her voice and was sick. She said didn’t want to perform unless she was at her best. She’s been sick a lot this year and we all want her to get better, just like anyone else who’s ill. Props to Amy for posting a video apology on Instagram.

When I first learned her show was cancelled the cynical side of me thought she had Election fever. Perhaps she realized she wanted to stay up late and party instead of going home early, resting up and performing in Toronto the next night. Nah, I really gave her the benefit of the doubt… until a friend who was also disappointed about missing the show told me to take another look at Amy’s Instagram account. Well, what do you know? That the same “sick” Amy was posting selfies during the Clinton event at the Javits Center on Election Night!
Here…

Still sick but showin up for the fam and madame president!

Do you really think Amy was too sick to perform this week or do you think she cancelled her shows so she could stay up late and party? Perhaps we’ll never really know but why post all those selfies and give your fans reason to doubt you?

Perhaps the biggest travesty of the week was news that the iconic shape of the beloved Toblerone bar has been altered slightly in two smaller sized-bars in order to control costs. People in the UK went mad and didn’t hold back their disappointment in social media. Some, even blamed it on Brexit. At press time, this tweet received more than 6.3K retweets!

#toblerone #brexit I told you that leaving the EU would have serious consequences. Now I' m really upset. pic.twitter.com/w81cWYpNl4

Next thing you know memes demonstrating the best way to use the new Toblerone started popping up everywhere. Have one you’d like to share? The Daily Mirror wants to know. 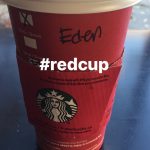 Red Cups ARE Back!

Last week, I wrote about Starbucks’ green cup controversy in Seeing Red This Holiday Season. Good news: they’re back! Yesterday I had my first #RedCup of the year. Have you had yours?

Brooke, our resident sports fan, shared this one from Steph and Ayesha Curry filmed during the last night of her pop-up restaurant, International Smoke. Some say it won the Internet this week. See for yourself.
Steph & Ayesha Curry do the Mannequin Challenge!

Which Mannequin Challenge is your favourite? Share a link in the comments.

Here’s an episode from the archives that has some relevance this week. Chris Rock’s monologue for the 80th Academy Awards was all about the #WhiteOscars hashtag, and we loved it. And one solution Hollywood might want to look into is the Rent-a-Minority website, made for employers who “are racist, but don’t want to look racist.” Ok, it’s a satirical website, but we think it makes an interesting statement. Speaking of interesting statements, Toronto’s own Maayan Ziv has created an app that crowdsources accessible spots in different cities — it’s called ACCESS NOW. And another app that has our attention is the PartPic which is like Shazam for parts you might need. Just take a picture and it identifies the part and helps you find a replacement. The background music is ‘Funky Element’ from BenSound.com and is used with attribution. Listen up! And, if you like what you hear, please review Ada’s Sisters on iTunes.