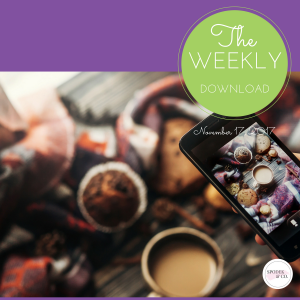 Facebook’s new Creator app, more Instagram updates, an exciting announcement for Canadians from Amazon, and Friday Fun are all waiting for you in this week’s edition of The Weekly Download.

Canadians got excited this week when Amazon announced its plans to bring Echo, Alexa and Prime Music north of the border. For many disgruntled Canucks who feel that we’ve been left out of the loop when it comes to new technology, the news was welcome — if also terribly overdue.

Presales for the Echo Dot, Echo and Echo Plus are open now with an estimated shipping date of December 5 — just in time for the holidays! Prime Music is available to Canadians now.

Will you be trying one of these? What about Google Home?

Users will be able to add intros, outros and custom emoji reactions to their live broadcasts. Other key features include a unified inbox for Facebook, Messenger and Instagram, boosted analytics, and in-app access to Facebook Camera and Stories.

For now, the app is only available on iOS with plans to expand to Android in the coming months.

While searching by hashtag on Instagram is nothing new, soon users will be able to follow these hashtags — whether it be #puppies or #recipes. Not only is this good news for users with niche interests, it’s got great potential for marketers. Worried that you haven’t seen the update yet in your feed? Apparently it’s undergoing testing with a subset of users and will be rolling out to everyone at a later date.

Instagram also announced that you can now upload photos and videos from your camera roll to your story regardless of when it was taken. If you choose a photo or video that’s more than 24 hours old, you’ll automatically see a new sticker that helps you add context for when it was taken. As with all stickers, you can rotate, resize or remove the date sticker from your story before you share. Cue the #throwbackthursday posts.

Last week, we took time to reflect and express our gratitude on Remembrance Day for the many men and women who fought for our country and many of the freedoms that we enjoy today.

To commemorate the occasion, a Tim Hortons in Calgary created a poppy-emblazoned doughnut. Although the intentions behind the treat were good, the sacred meaning behind the symbol and the opportunity to “cash in” was not lost on some.

Some took to social media to express their concern about the doughnuts, noting that the proceeds didn’t appear to be going to charity.

Celebs read Jimmy Kimmel mean tweets about him for his birthday