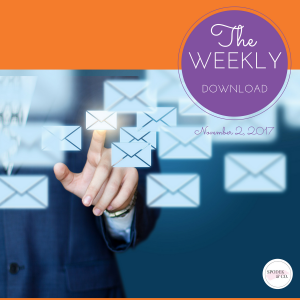 Have you recovered yet from Halloween? If we have to look at another mini chocolate bar ever again, it would be too soon!

This week we’re chatting about the benefits of CASL (yes, you read that right!), your iPhone’s somewhat creepy AI, Facebook’s new “Sets,” the price businesses and consumers pay for online reviews, and LinkedIn’s new smart replies.

Following the announcement of Canada’s anti-spam legislation (CASL) in 2014, it’s no secret that the business community had a number of worries and complaints, particularly surrounding breadth and cost of implementation.

Three years later, a mandatory review of the legislation demonstrates that not only has it helped reduce the amount of unwanted spam, it has also made Canada a worldwide leader in anti-spam.
The study also found that there has been a steady increase in the number of commercial e-mail campaigns in Canada, suggesting that, rather than dissuading businesses from using email for marketing purposes, the law may have both increased its effectiveness and use.

Have you found it difficult to comply with CASL? What positives or negatives has your business seen as a result? Let us know how we can help.

Your iPhone’s AI is tracking and (weirdly) categorizing your photos

ATTENTION ALL GIRLS ALL GIRLS!!! Go to your photos and type in the ‘Brassiere’ why are apple saving these and made it a folder!!?!!?😱😱😱😱

Since the discovery has gone viral, many have put it to the test. While the search doesn’t always pull up the photos you’d expect to see, sometimes including pictures of dresses or bathing suits with thin straps, it’s pretty accurate.

If you’re feeling freaked, don’t worry – your phone’s AI is doing this only on the device and won’t allow anyone else to look at these categories. Unfortunately Apple’s Photos app does not allow you to turn the AI off.

Facebook is testing a feature called Sets that allows you to select several status updates, photos or videos and share them as a themed collection to everyone or specific friends.

Sound familiar? The feature is said to help the social network compete with Pinterest, which uses Boards to help users categorize the pictures, links and articles they want to save or share with friends.

Still just testing the feature in a few countries, Facebook says: “We’re testing a way for people to create sets of specific posts, photos and videos for just the friends that want to follow along.”

Not only can bad online reviews be devastating for the reputation of a business – although some of us would argue there are benefits to negative reviews too – they can also lead to serious problems for the people who write them. This week, CBC News took a deep dive into the real ramifications of leaving online reviews for both parties involved.

While consumers or clients should have the ability to voice their concerns online without fear of consequence, it’s been found that Canada lags behind other countries in not only implementing protection for those who post online reviews, but the businesses those posts are about. As a result, some Canadians are being threatened with legal action while businesses are left with little recourse when targeted by unfair or inaccurate reviews.

Last year, the U.S. passed a federal law that aims to protect online review writers called The Consumer Review Fairness Act by preventing businesses from launching suits where an honest and fair online review is given even if it’s negative. Whether or not something similar is on the horizon for Canada remains unknown.

Ever spent precious time deciding how to best respond to a message sitting in your LinkedIn inbox? The business social network’s newest feature hopes to help with that.

Introduced last week, LinkedIn’s smart replies uses machine learning to develop (at most) three responses that are more contextual and relevant to the conversation at hand. Coming soon, personalization will go one step further: you may soon see a response like “Thanks, Joe!” instead of the more simplified “Thanks.”

Have you been waiting Jimmy Kimmel Live! this week too? He’s been off all week while his chair has been taken over by notable guest hosts, including Shaquille O’Neal, Dave Grohl, Jennifer Lawrence… and Channing Tatum on Wednesday night. If you haven’t seen his opening dance number,  watch it now.

When Chan was guest hosting, he, Jimmy and their adorable daughters shared a couple videos. We couldn’t resist sharing them with you. Have you done the same prank at home? If so, and you mean enough to record them, you can share them with the Jimmy Kimmel Live! community too!