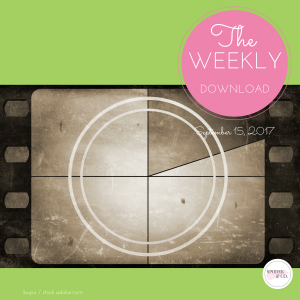 Well, hello there! We’re glad to see you again. Welcome back for another edition of The Weekly Download, where we round up some of the week’s top stories in business and digital.

From the new iPhone X to a tiny Torontonian making headlines for his love of learning, here’s what you might have missed this week:

In case you’ve been living under a rock, Apple unveiled the iPhone X this week. With a new all-screen design, new FaceID feature and the smartest chip ever in a smartphone, it’s also Apple’s most expensive smartphone in their product lineup.

One of the phone’s coolest new features is the Animoji, Apple’s new twist on augmented reality, which lets users create animated emoji messages that reflect their actual facial expressions and voices.
Will you be lining up at the Apple Store on November 3 to pick one up?

Facebook’s newest feature wants to connect you with your friend’s friends. The update suggests similar friends and even highlights what you have in common with other users and even places where you may have crossed paths.

To check out the update, tap on another user’s profile, select “friends,” and choose the icon at the top of the screen that invites you to “get to know [username’s] friends.” The app will then show you what you have in common with that friend-of-a-friend, including mutual friends, pages liked, events attended, and even places lived or worked.

Though it’s not clear if the update has rolled out globally yet, it certainly makes the social app a little more “social.”

This week, LinkedIn announced a new way to expand your digital footprint and reach professionals with Sponsored Content.

In addition to providing the ability to block IAB categories and upload custom block lists, advertisers will also be able to download performance reports that include clicks, impressions, and engagement to help compare network ad performance to onsite ad performance.

Of the 6,000 participants in the Audience Network beta program, advertisers have apparently seen a 3-13% increase in unique impressions served, and up to an 80% increase in unique clicks.
Tell us, will you be trying LinkedIn’s new advertising feature?

Social media is no longer an optional marketing strategy — it’s an absolute must-have.
In fact, according to research from Olapic, 56% of consumers are more likely to buy a product after seeing it featured in a positive or relatable user-generated image and seven times more likely to trust images of other consumers on social media than traditional advertising.

From bringing social media in-store with user-generated content (UGC) to monitoring social activity with in-house command centres, big brands like Lowe’s and Sephora have embraced social media and found new ways to mix it with traditional brick-and-mortar strategies. Updates like Instagram’s “Stories” and “Shop Now” features have given brands new ways to promote their products and convert customers.
Since it’s still relatively new, the potential for the UGC and brick-and-mortar mix is untapped. How would you use it to grow your business?

Silent films are “in” again – thanks to social media

In a new article, the New York Times takes a deep dive on the “silent film culture” that apps like Facebook, Twitter and Instagram have made popular. The bite-sized clips that seem to spread the furthest on social media are the ones that transcend language barriers and can be watched on mute. According to BBDO Worldwide, an online video analytics company, more than 85 percent of its clients’ Facebook videos are viewed with the sound off.

Besides the silence, there are many more similarities between the silent films of the past and the social media clips of today, namely the emphasis on animals and babies.

Isaiah McDonald, who was featured on CBC’s “Kids That Are Kind Of Amazing At Stuff” earlier this year, appeared on “Live With Kelly and Ryan” this week and beat both hosts in a flag and country identifying contest.

Facebook just released some information about inauthentic accounts and their influence on the 2016 U.S. election that we should talk about because things couldn’t possibly get weirder on THAT front. Speaking of weird things – there’s an app to get students to stop fiddling with… their apps. Penelope Gazin and Kate Dwyer faced a lot of sexism and condescension when they launched their e-commerce marketplace for weird art until they introduced an imaginary cofounder named Keith. We’re loving this awesome twitter thread satirizing how SOME men talk about women that reverses the sexism with humour. And Google Maps has some additions you might not have noticed and they’re updating their content and data with AI.