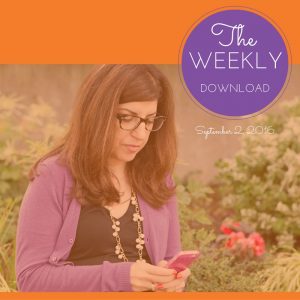 If you’re like most people I know, this week was the last relaxing stretch before Labour Day. Lots is happening in September and everyone is scrambling to get ready for product launches, announcements, back-to-school, special events… and the list goes on. So, starting at the end of business today (whatever time that is for you and if you’re lucky, it won’t be much past noon) through Monday, take some time to sit back and relax before the real September crunch starts. To help you, this edition of The Weekly Download focuses on fun, free and/or entertaining things you can do if you’re not at the cottage this weekend.
Enjoy!

By now you probably know that I love Instagram. It keeps getting easier to use and new features keep getting added. The latest one takes care of one of my two Instagram pet peeves: not being able zoom in on photos and videos in your feed – well now you can! The other one of my pet peeves is a necessary evil: Sponsored posts! Wouldn’t they be much better if we could choose the types of sponsored posts we’d like to see? One thing we need to remember is there’s no such thing as free and seeing sponsored content in our feed is the price we pay for belonging to most social networks… at least the more successful ones.

Starting today, you can pinch to zoom on photos and videos in feed, on profiles and on Explore. Dive into an adorable puppy’s smile or into every detail of your friend’s new shirt. Over the past six months, you’ve seen many exciting changes come to Instagram, from a new icon to longer videos and even a new way to share everyday moments with Instagram Stories. And as things change, we’re still focused on improving the core parts of Instagram. Zoom is available today for Instagram on iOS. Zoom will be available on Android in the coming weeks. 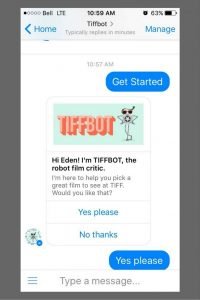 This time of year is tough. Although it’s technically still summer for another few weeks, once Labour Day passes it feels like summer is over. But for those of us in Toronto, we have something to look forward to with TIFF starting next week. Well, at least us movie lovers do. Shortly after I started Eden Spodek Inc., I had the pleasure of working with a foreign film producer for the premiere of his latest film. I organized a family event for parents and their kids to watch the premiere and attend a mini-news conference with Heather Graham, who starred in the animated/live-action film. As a result, I was also able to get tickets to a red carpet gala starring Clive Owen and Robert DeNiro! I did it for a friend who is a HUGE fan of Clive Owen and the gala was on her birthday. Oh, what stories we have to tell from that experience. Last year, I attended two special events thanks to my husband who is one of the most successful ticket buyers I know: the live read of The Princess Bride directed by Jason Reitman, and the world premiere of Keith Richards: Under the Influence followed by a live Q&A with the Stones’ bass player. This year, I have no idea what to see and like always the line-up is huge. blogTO shared their list of buzzworthy films yesterday. Still don’t know what to choose? Introducing TIFFBOT. In conjunction with TWA and 88 Creative, TIFF launched TIFFBOT, a chat bot within Facebook Messenger that recommends TIFF films based on your likes and dislikes. Check it out! 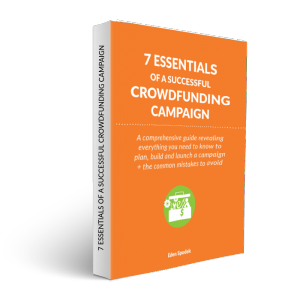 My First eBook… and it’s Yours for FREE!

Have you noticed I’ve been somewhat OBSESSED with crowdfunding this summer? I’m excited about consulting on another crowdfunding campaign. I can’t wait to share the details with you this fall. Even if you’re not sure whether crowdfunding is right for you, check out my guide. You never know what you might learn. All I ask in return is if you like it, please forward this newsletter to a friend and invite them to download out the guide. Easy peasy!

Mwah!
Amy Schumer Gets Heckled in Stockholm
I LOVE Amy Schumer. Why? Because she doesn’t take sh*t from anyone, tells it like it is – her new book is raw – and ad libs like it’s nobody’s business.

Strap yourself in because this is an episode from the Ada’s Sisters’ archives that’s full of ups and downs. The Girls Who Code scholarship is all up, with a plan to give away US $1M to high school students who want to learn to code. In the list of downers, Gillian Anderson was offered half the salary of her fictitious FBI partner to star in the 6-part X-Files series. Now THAT’s something that Angela would like to see like to see burned with fire. Not that I wouldn’t but I didn’t/don’t watch the X-Files just to give a bit of context, or lack thereof. We get a little more info about why Rey was excluded from the action figure toy packs for The Force Awakens and it’s all Dark Side if you know what I mean. And Vimeo’s new ‘Share the Screen’ initiative should have lifted us to new heights, and would have, if not for Gregory Alan Elliott’s not guilty win in his Twitter harassment case. To be clear, he was harassing, and now that he’s ‘not guilty’ he has no intention of changing his ways. Awesome. Listen up! And, if you like what you hear, please review Ada’s Sisters on iTunes.