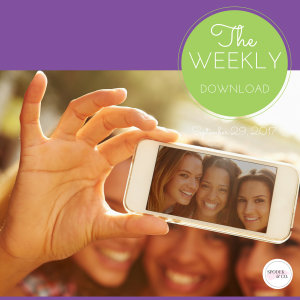 It feels like just as we said hello to September, we’re already saying goodbye! What were some of your highlights from the month?

Look out SnapChat — Instagram now counts 800 million monthly active users, 500 million of whom are are daily users. According to Instagram, this latest growth was the fastest it’s ever added 100 million new users.

Big news in the Twittersphere this week — the social network is testing a new 280-character limit with a small subset of users.

It’s not the first time Twitter has eased its character restrictions — photos, videos and polls are not counted toward the character limit. Users have found other creative ways to get around the restrictions, including taking screenshots of blocks of text.

Will you be sad to see the 140-character limit go, or will you embrace the extra space?

What does Apple’s new ITP mean for marketers?

Apple’s newly announced ITP (Intelligent Tracking Prevention) for Safari means marketers are facing another obstacle when it comes to online campaigns. The new feature creates a potential roadblock for Retargeting ads — a great way to persuade users to return to a site or convert into a paying customer.

Although the initiative is based on user privacy, marketers are worried. ITP limits the scope and reach of ads online, meaning ads might not reach a portion of your target audiences. Apple’s ITP will put a 24 hour limit on ad retargeting. Third-party cookies are blocked after one day and then completely purged from the user’s device after one month.

If there’s a silver lining, it’s that Apple’s default browser is only used by 14.9% of online users. Google has also spoken out about the Apple update, noting that a new Google Analytics cookie will keep ad tracking from Safari for AdWords campaigns, changing the way it reports on conversions in AdWords.

“This Is Us” Sound Guy Can’t Stop Crying

Are you a This Is Us fan? Even though most episodes inevitably leave us in tears, we can’t stop watching! This skit from Jimmy Fallon is too accurate.

Prince Harry’s visit to Toronto for the Invictus Games has been making headlines this week, but this exchange between him and two-year-old Emily Henson may be the cutest moment captured yet.

Ever searched for a guide to help you get on your teen’s social media level? This infographic post from WIRED has you covered. Some highlights — don’t unlike, never screengrab, and parents must only lurk (no comments!).

After a rough day, Chrissy Teigen did something totally relatable — she leaned on the Internet for some solidarity.

The results were hilarious:

My 4 year old son asked me why I was putting on makeup and I said “To make me look pretty.” He replied “I don’t think it’s working.”

Same except I get an added smack to the face

After rotten long flight from Germany, Dylan saw store whose sign was a 3D car coming out the wall, and said, “I hope it hits you.” -H

Ada’s Sisters – Episode 71: Amazon H2Q, Catalyst, Google Drive, Verrit and BeccaToldMe
Some big changes coming in Google Drive and the newest Apple OS update and Amazon is looking for a new HQ, could a Canadian city provide that spot? Maybe if they haven’t heard about the terrible hiring choices Catalyst Canada is making.

At least #BeccaToldMe gives us something to be proud of.

What about MOMs TO “A very mommy wine festival?” Something to be proud of? We’ll talk about it.
And we have to talk about Verrit because it’s so weird.

And more than 100 thousand Canadians were effected by the Equifax breach, so of course it’s on the pod.