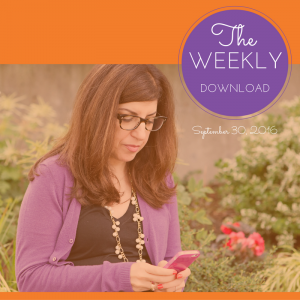 How’s your week been? This has been one of ups and downs for me on the personal side. Work has definitely been a highlight, especially when I get lots of positive reinforcement from people like you who read this blog or my email newsletter and get in touch with me as a result. It’s always good to know I’m not writing in a vacuum and it’s even better when people like what you have to say and/or want to extend the conversation of the screen.

There’s quite the eclectic story collection this week. I hope you’ll enjoy reading about it and don’t be shy. If you have something to say, add it to the comments or drop me an email. I’ll reply as fast as I can.

Did you watch the first of the U.S. Presidential Debates on Monday night? After spending the previous weekend discussing the upcoming elections with a cross section of friends and family who live across the United States, I watched with a bit of a different perspective than I would have otherwise. Would the debate have changed my vote if I were able to cast one? Nope, not one iota. But, I’m not representative of many of the voters. What about you? Were you one of the almost 2 million people who visited the fact checker at HillaryClinton.com during the first hour of the debate? As a point of comparison, that’s about 20 times more people than the usual number of hourly visitors to her website prior to the debate. Her team tracked 58 “Iies” from her opponent in 90 minutes and you can read many of his “interesting” claims here.

Are You Ready for the Post-App Era?

My friend and colleague Jodi Echakowitz shared this story from Community Weekly about the next stage in mobile communication, it’s called “the post-app era.” Speaking recently in South Africa, Gartner vice-president and distinguished analyst, David Willis shared where he thinks the world of mobile is headed. We’ll see less dependence on apps and an increase in the use of bots (already growing in messaging apps such as WhatsApp and iMessage) and virtual personal assistants (VPAs). Willis predicts that the process will evolve over the next three-to-four years and advises businesses to be ready. One of the reasons for this shift is the growth of IoT (the Internet of Things). Do you think Willis is right? Where do you see mobile apps and bots heading over the next few years?

On the subject of mobile messaging apps, did you know Apple is logging your iMessage contacts and may share it with law enforcement, if necessary? The content of your messages are private but not people you contact using the app. Apple isn’t alone either.

Are You Hiring Unicorns?

Ryan Holmes, CEO of Hootsuite published his thoughts about a rare breed of people he calls Unicorn Employees. Through extensive work with my business coach, I’ve learned to identify and invite people to work with me who possess many of these qualities. I’m proud of the group we’ve become and really learned you get what you pay for and how far mutual respect in the workplace can take a company in terms of delivering great work… all the time! So in part this serves as recognition and thank you to the fabulous team who keeps me sane but what I really want to focus on is you and your business. Do you work with unicorns too? How do you identify them through the hiring process and sustain them over the long haul?

Want to launch a crowdfunding campaign, but no clue where to start? Unsure how to make it a success?

Let me show you how, step-by-step, in the ULTIMATE CROWDFUNDING MASTERCLASS.
Grab your seat now to my Ulitimate Crowdfunding Masterclass Course – there’s still time to register and I’d love to see you there.

Yes, I Want to Join!

Tom Hanks aka The Wedding Crasher
Who doesn’t love Tom Hanks? Or Central Park for that matter. Enjoy!

Is Braggadocious a word?
How could I resist sharing this little gem from my friend Bob LeDrew?
Super hella fragile racist extra braggadocious

This week, enjoy this timely episode from our archives. If you haven’t seen the video where men read horrible tweets sent to female sportscasters, we’re going to tell you all about it. And then we’ll pull out our woman cards. Never heard of them? Neither have we. But Trump tells us it’s a sneaky thing we’ve had access to for generations and have used to become the strongest force in the world. If you believe that load of cow paddies, then you should read some of Ross Putman’s tweets. He’s a Hollywood producer who posts lines from some of the more ridiculously gendered scripts he gets handed.

Thankfully, there is some good news from the internets, namely Etsy’s efforts to balance out their gender diversity. And the BEST news on the internet this week has to be the Princess Awesome clothing line for little girls who love dresses with cars and math stamped all over them. Listen up! And, if you like what you hear, please review Ada’s Sisters on iTunes.