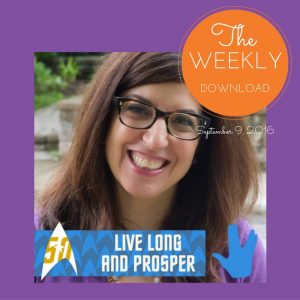 Welcome to the Back-to-School issue of The Weekly Download. Most schools in Ontario, Canada, where I live started this week.

It feels a bit strange because this is the first year I’m not directly involved in the back-to-school chaos. Both my kids are now in university. It’s also strange because my younger son is celebrating his birthday today and for the first time in 18 years, we’re not celebrating it together. He’s experiencing a hybrid of frosh week and the second day of classes. It’s also the week that Apple traditionally has a news conference introducing new and/or improved products. (How appropriate: Apple, Back-to-School, get it?) So this week we’re all about education and Apple.

An Apple a Day…

On Wednesday, Apple made a whole bunch of announcements. The first is one for iPhone users: iOS 10 is being released next Tuesday (September 13) and has all kinds of new features. Most notably a redesign of Apple Music (thank goodness), improved gaming and Super Mario Run for all you Pokémon GO fans.
Apple is increasing their commitment to education with ConnectED, a grant program providing students and teachers with technology for the classroom.

Lagging behind the competition isn’t typically what comes to mind when we think about Apple but when it comes to collaborative software, that’s exactly what happened. iWork is getting an update which will finally allow people to collaborate.

Apple Watch S2 is the new faster, thinner version of Apple’s wearable tech that looks similar to the original Apple watch with supped up features including waterproofing – another feature Apple needed to incorporate in order to be competitive with its peers. And, wait for it… Pokémon GO.

iPhone 7 and 7 Plus are probably not a big surprise to those following pre-news conference speculation, Apple introduced its new iPhones and they’re available for pre-order TODAY! What are you waiting for? The biggest talk I’ve heard about it is the removal of the headphone jack, new dual-lens camera, new colours and water-resistant coating (long overdue IMHO and you won’t need to keep an emergency bag of rice in your cupboard). But the even bigger talk about the new iPhone has been about the wireless AirPods.

Yesterday Twitter announced it was enhancing the functionality of DMs by adding read receipts, typing indicators and web link previews. If it sounds familiar that’s because it’s becoming more like Facebook Messenger (and WhatsApp). Have you ever used group DMs on Twitter? If you said, “No,” you’re not alone. Until yesterday, I hadn’t either. Now I have a list for my family since my kids are away and they seem to use Twitter ALL THE TIME! Why did that change yesterday? When Twitter announced it’s rolling out this new feature, I had to test it out… and I have that feature now. What about you?

And while we’re on the topic of Twitter enhancements, did you know they added a button that lets you subscribe to live video notifications? Have you tried it yet?

Tory Takes a Ride on the Red Rocket

Toronto Mayor John Tory didn’t exactly go back to school but he got an education of his own this week when he accepted a Twitter challenge from Bianca Spence to ride the subway (aka the red rocket) on a hot, humid and very sticky day.

.@JohnTory Have you felt what a train with no A/C feels like during a heat advisory? You should. Because residents are suffering.

The two of them rode together during the morning rush hour. Tory’s response to the TTC: “…do better…” Needless to say, my Facebook and Twitter streams were filled with this story.

ICYMI My First eBook… and it’s Yours for FREE!

Have you noticed I’ve been somewhat OBSESSED with crowdfunding this summer? I’m excited about consulting on another crowdfunding campaign. I can’t wait to share the details with you this fall. Even if you’re not sure whether crowdfunding is right for you, check out my guide. You never know what you might learn. All I ask in return is if you like it, please forward this to a friend and invite them to download the guide. Easy peasy!

Star Trek Turns 50
Star Trek turned 50 yesterday… and Facebook is celebrating with all kinds of cool stuff including bling for your profile and Star Trek reactions for some of us.

Another new episode this week and we talk about another awesome return-ship program, this one including some big name companies like IBM. Our hashtag this week is about supporting mental health because #ItsOkToTalk. Jim Hines over on Gizmodo wrote an article about sexual harassment in Sci Fi that we think is worth your attention. Our friend Kim Vallée tagged us on a Forbes article featuring a top 11 list of things women can do to get ahead – as preached by Cindy Gallop of MakeLovenotPorn fame. Listen up! And, if you like what you hear, please review Ada’s Sisters on iTunes.

Happy Friday and welcome back to #TheWeeklyDownload! And a very happy Reopening Day to our Ontario friends!

Here’s the #digitalmarketing and #tech news you need that you might have missed this week: