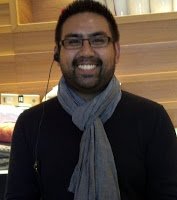 According to his bio, “Neil Gazmen is a retail people manager with over 9 years experience in managing high volume, complex stores in the Toronto area. He is a strong supporter of relationship based selling and grassroots type marketing that targets building a community of loyal followers, one customer at a time.” The last sentence is quite telling.

I met Neil on Twitter several months ago and recently in real life. He’s always bright, friendly and busy making everyday conversation with his Twitter community. Although he’s always quick to answer customer questions, he makes a point of being himself and not overtly promoting west elm or its Toronto store – the first Canadian location – where he is Associate Store Manager.  A of couple weeks ago we had a chance to chat and in a few minutes shared each of our “how we got into social media” stories. I was fascinated by how he’s been helping west elm build relationships with customers one tweet at a time and asked if I could share some of his story with you.

How long have you been working for west elm and where have you traveled?

I have been with west elm since September 2008, a month before our first Canadian store opened in Toronto’s Liberty Village in October 2008. I have had the pleasure of traveling to New York City and Brooklyn (west elm’s headquarters), Boston, and Scottsdale, in July of 2012 for Williams-Sonoma Inc’s General Managers’ Conference. I have also traveled to Seattle and Vancouver to help setup and train staff in these two new stores. Most recently, I was in Dubai this February to help setup and train the staff in the Middle East’s second west elm store with our franchise partner, M.H. Alshaya Co.

Why did you decide to use Twitter to connect with West Elm customers?

When I personally started using Twitter, for my own enjoyment. I found it interesting that users were able to connect with each other via a #tweetup. I thought that this was such a great way to get users together, who had a common interest and meet. I also saw that companies were creating corporate accounts to communicate with customers but very few had local accounts.

At that point, I started to think about how I could connect with our local customers at west elm through social media. I began searching for tweets with the hashtag #westelm and found quite a few customers tweeting about their experience in our store or posting photos of some of their favourite things while shopping. I tried to do the same type of search on Facebook but found it much more difficult and noticed that there were more of our customers active on Twitter. So it was just natural to use Twitter to connect with our customers.

At first, it started with just thanking customers who came into the store and inviting them to connect in person when they came back. Then it turned into customers doing stock checks and asking for my opinion on products. What was really amazing was that I had a better chance of getting in contact with a customer via Twitter than I would if I tried to call or send an email. There’s something about the allure of Twitter and the short, to the point, conversations that you can have, that makes it a great vehicle to build a relationship between our brand and our customers. It became clear, after just a few months, that customers (including interior designers, stylists, and bloggers) really appreciated being able to ask a question about west elm, at any time of the day, and get a response. I think what they also appreciated was that as much as they were able to connect online, if they chose to come by the store, they would be able to connect in person, too.

How are you demonstrating the value to your employer?

What has been great is that my employer already sees the value of connecting with customers through social media. west elm’s corporate public relations and social media teams have been amazing to work with and encourage me to continue to discover new ways to develop customer relationships online.

I have tracked sales in the past, for my own curiosity, and was amazed at how much volume was produced. For example, a simple tweet about a bedding sale can bring a customer into the store who wasn’t planning on coming in, but when they leave the store, they didn’t just buy new bedding, but a whole new set of bedroom furniture. The tweet initially brought the customer to the store, however, our customer service team was able to uncover other needs and add onto the sale. This is key to online relationship building and making it personal – creating a seamless service experience both in store and online.

Apart from measuring sales and customer satisfaction, there’s something to be said about the overall engagement of customers or potential customers mentioning the brand and creating brand awareness. As a smaller organization (at the time when I started, we were the only store in Canada and now there are three) I found that social media, and Twitter specifically, was a great way to create brand awareness that would reach farther than our community of Toronto. This was also a great opportunity to see where we have a large following of customers in cities where we haven’t opened up shop and see what they were interested in but also reach out once we opened up a store in their neighbourhood.

If you could share one piece of advice to other retailers about using social media, what would it be?

Engage. It’s way too easy to just communicate with followers when they mention your brand or comment on a tweet you’ve posted. Building online relationships with followers is much more than that. It’s replying to followers’ posts that don’t necessarily have to do with the brand or commenting on what they’re doing. Taking that one step further to engage beyond the brand, keeps you in the know with what your followers are up to but also keeps your brand top of mind the next time they have a need that you may be able to fulfill. The other half to this, is engaging in your local community. If your brand is fortunate to have a brand and service ambassador in a market, encourage them to engage with their local customers to nurture and build online relationships. Engaging with customers outside the store, online, completely transforms the dynamic of the relationship from a transactional customer/brand relationship to a personal connection between the customer and the brand where you can grow and develop the relationship together.